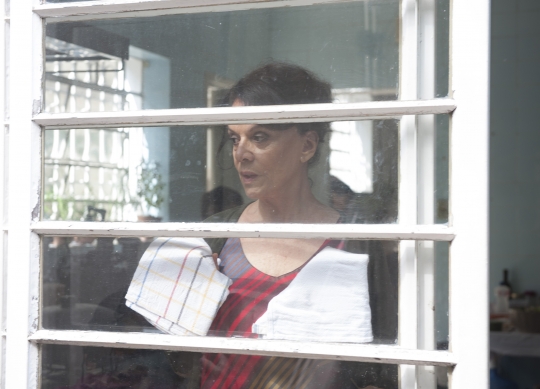 Rosa is in her late thirties. Her parents are divorced. She lives with her own family in an apartment in central São Paulo. Her husband is often away on research trips that are not particularly lucrative, so it’s up to her to support and care for their two daughters. Instead of concentrating on her calling as a playwright she is obliged to earn a living writing advertising copy for a bathroom ceramics company. Coping with sexual conflicts in her relationship, dealing with problems with her various commissions, but also being obliged to tend to her fragile father’s needy artistic personality all present an increasing challenge to Rosa. When Rosa’s mother makes a surprising disclosure to her one day, Rosa decides to break out of her usual obligations. In so doing she discovers that life holds many surprises in store for her. Laís Bodanzky’s impressively naturalistic film portrays the lives of three generations living in Brazil’s largest city. These are lives caught between individual passions and living the lie. At the heart of the film is the portrait of a woman engulfed by the permanent demands that are placed upon her who decides to find out who she really is.

Born in São Paulo in 1969, she has received numerous national and international awards for her films. Her debut feature Bicho de Sete Cabeças (Brainstorm) screened at the Toronto International Film Festival and won Best Film at the Biarritz Film Festival; Chega de Saudade (The Ballroom) was awarded the Grand Prix at the Festival Tous Écrans in Geneva. As Melhores Coisas do Mundo (The Best Things in the World) premiered at the Festa del Cinema di Roma. She also directs documentary films, music videos and theatre.