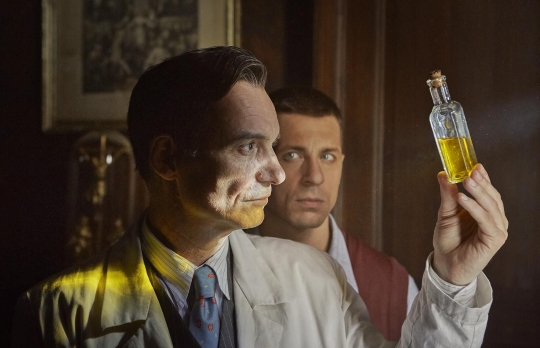 Jan Mikolášek is the epitome of aplomb and solidarity. He is talented, sensitive, assertive and enigmatic. In his youth and when he is older, regardless of whether he is in private or public, he is a man of action, reason and intuition. A faith healer. Just one glance at the urine bottle is enough for him to know what ails his patient. With fame comes fortune, and this at a time when Czechoslovakia is a pawn in a game being played by the major power blocs. Protected and used by both the National Socialist and Communist regimes, he steps in wherever the system fails. But during the post-Stalinist years, the political climate becomes unpredictable and his special status is endangered. Along with his assistant František, with whom, as the secret police are well aware, he has much more in common than herbal medicine, the charlatan finds his morals being put to the test.

Based on the life of Jan Mikolášek (1889–1973), and with a screenplay by Marek Epstein, Agnieszka Holland once again explores the link between the private and the political, and the relationship between the passage of time and the story of an unconventional individual.

Born in Warsaw, Poland in 1948, she graduated from the FAMU film school in Prague and began her career assisting Krzysztof Zanussi and Andrzej Wajda. She collaborated with Krzysztof Kieślowski on the screenplay of his Three Colors trilogy. Her film Gorączka screened in Competition at the Berlinale in 1981, the year in which she emigrated to Paris. Since then she has made over 30 films, winning awards including the Golden Globe and a Berlinale Silver Bear, and being nominated for a BAFTA and an Emmy. Her films In Darkness, Europa Europa and Angry Harvest were all nominated for an Academy Award.