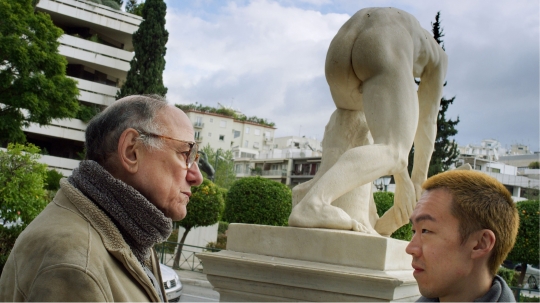 An archaeologist and a weapons designer, who knew each other in a previous life as a filmmaker and a psychoanalyst, meet at an excavation site in the Negev desert and begin a conversation about love and war, which they continue in the Israeli city of Be’er Sheva. A series of encounters with alternating actors in different roles ensues, which leads the viewer through the cities of Athens, Berlin, Hong Kong and São Paulo. Among those appearing are: an old artist who meets his younger self; a mother who lives with her two grown-up sons, a priest and a policeman; a Chinese and a Japanese woman; a curator and a cosmologist. The protagonists’ dialogues revolve around social taboos that have become obsolete, generational conflicts, war guilt and cosmologies. The architecture of these five cities serves as a third interlocutor in the protagonists’ conversations and completes their philosophical and metaphysical journeys.

Heinz Emigholz was born in 1948 in Achim, near Bremen. Since 1973, he has worked as a freelance filmmaker, artist, writer, cinematographer, producer, and journalist. In 1974, he began an encyclopaedic series of drawings, Die Basis des Make-Up. In 1978, he founded his own production company, Pym Films. In 1984, he began a film series called Photographie und jenseits/Photography and beyond. From 1993 to 2013, he held a professorship in experimental filmmaking at the Berlin University of the Arts, where he is a co-founder of the Institute for Time-Based Media and the university’s art and media course. Since 2012 he has been a member of the Academy of Arts in Berlin.