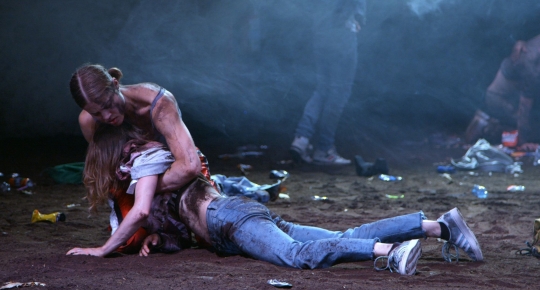 The film about Gisèle Vienne’s dance piece “Crowd” is a techno party gone rave, awash with repetitive movements, physical and emotional encounters between fifteen bodies charged with sexual energy. The camera keeps us plunged into the heart of the choreography, repeatedly zooming out to allow for an insight into the rehearsal process. Through staged one-on-one conversations between the performers, we learn about the background story of their characters. In this way, the characters in the choreography become the characters of the film: there is a trans* boy, a “Nazi” boy that desires a gay boy, a girl attracted to troubled people, and a
woman who exudes raw sexuality. Reality and fiction begin to blend. Loud electronic music accompanies the ecstatic bodies moving in slow motion. The cinema becomes a rave and an extension of the stage, and a dance documentary turns into an exhilarating neon-lit fresco of a young, international troupe.

Continuing his exploration of alienation, hyper-sensuality, emotional violence, human tenderness, and performance of (queer) sexuality, Patric Chiha has created a transformative film with a distinctive style, dripping with visual and emotional intensity.

Born in Vienna, Austria in 1975, he studied fashion design in Paris and then film editing at the INSAS film school in Brussels. His short and documentary films have screened at several festivals. His feature film debut Domaine, starring Béatrice Dalle, premiered at the 2009 Venice Film Festival. His documentary Brothers of the Night screened in the 2016 Panorama.