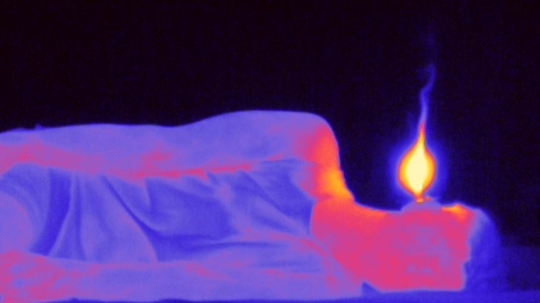 Composed of short vignettes in different techniques and materialities, UNTITLED SEQUENCE OF GAPS uses the form of an essay film to approach trauma-related memory loss via reflections on light outside the visible spectrum – on what is felt but never seen. Carefully shifting between planetary macro scales, physical phenomena and individual accounts of affective subject formation, the artist's voice considers violence and its workings, class and queerness not through representation but from within.

The video’s montage is slow and rhythmic, yet also uneven. The flow of images is interrupted by gaps that hold no less significance than the imagery itself. Footage in which public visual memory stands in for personal remembrance exists alongside sequences recorded via infrared imaging and scenes captured under ultraviolet light or microwave radiation. While pondering the effects of the invisible and the power inherent in shifting violence beyond visibility, the piece simultaneously reflects upon the digital archives and technologies that help shape the contemporary human’s relation to past, present and future.

The work tests the limits of vision and recordability, contemplating instances where a subject remains opaque to itself. Ghosts appear from holes ripped into time by an unremembered childhood, and a recently abolished witch-burning ritual in the artist's rural home town serves as a foil against which to question the politics of visibility.

Vika Kirchenbauer is an artist, writer and music producer based in Berlin. In her work she explores opacity in relation to representation of the ʻotheredʼ and discusses the role of emotions in contemporary art, labour and politics.

With particular focus on affective subject formation she examines the troublesome nature of “looking” and “being looked at” in larger contexts including labour within post-fordism and the experience economy, modern drone warfare and its insistence on unilateral staring, the power relationships of psychiatry, performer/spectator relations, participatory culture, contemporary art display and institutional representation of otherness as well as the everyday life experience of ambiguously gendered individuals.