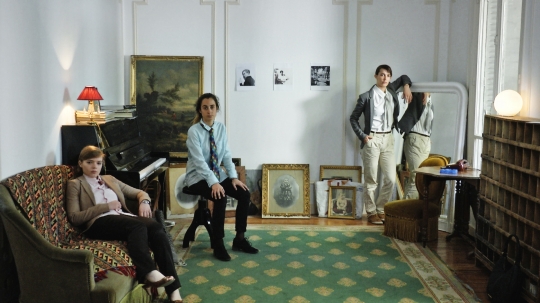 Annemarie Schwarzenbach was a shimmering figure of bohemian society of the 1920s. A talented writer, she was lesbian, addicted to drugs, a globetrotter, bewitchingly androgynous and – muchto her domineering Nazi-loving mother’s chagrin – also anti-fascist. Berlin photographer MarianneBreslauer described her as the most beautiful creature she had ever encountered. Schwarzenbachdied young at the age of 34. She remained forgotten until the 1980s when her books began to berepublished and her biography reconstructed. Director Véronique Aubouy does more than merelysave Annemarie Schwarzenbach from obscurity, she brings her into the present. Sixteen young
actors of both genders slip into different roles in order to play Schwarzenbach, her friends and lovers.Increasingly fascinated by the pull of this figure, their oscillations between genders becomes a jointproject. Something that begins as an audition in which the young actors are asked to attach their biographies to that of the writer, ends in a dance of relationships in which the borders between reality and dramatization are blurred.

Born in Paris, France in 1961, her work as a filmmaker and artist, in which fiction  and documentary often overlap, is imbued with literature, music, performance, photography and video art. Since 1993 she has worked on the ‘film marathon’  PROUST LU, a cinematic work which is now 120 hours in length and parts of which have been exhibited in numerous museums.