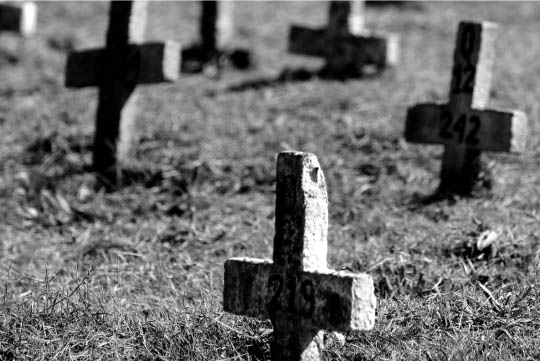 In Baixada Fluminense , a town near Rio de Janeiro, 29 people were killed by death squads in the largest massacre in Rio's history at the end of March 2005 . The murderers who have now been caught are police officers who belong to so-called extermination squads and are involved in extortion, kidnapping, drug trafficking and homicides. The roots of this problem go back to the 1950s and have now reached an extreme peak. The film is divided into four parts: Everyday life in Baixada Fluminense shows pictures of the inhabitants of the place, which were created after the massacre. The massacre describes the slaughter and the feelings it triggered. death squadsdeals with the killer's commands in the area and contains an interview with a professional killer. Everyday life 2 shows the people in Baixada Fluminense and their attempts to process what they have experienced. "The pictures in Atos dos Homens don't want to be beautiful at any moment. The camera trembles, we often took the pictures without a tripod. In situations like this, it becomes clear that the entire team was afraid to be there. But it wasn't about me to make a war reportage that uses violent images but only lasts for a short time. I was interested in the people who live in this area and some of whom didn't even have a special relationship to the massacre. "

ATOS DOS HOMENS was originally intended to be a film about the everyday life of people in Brazil who survived a massacre. Filming was scheduled for April 2005 - but reality didn't wait that long. The situation had changed on the last day of March, exactly a month before we wanted to start shooting, in Baixada Fluminense, a place near Rio de Janeiro, where twenty-nine people were in the greatest massacre in Rio de Janeiro history Janeiros has been killed by death squads. The murderers who have now been caught are local police officers who belong to so-called extermination orders and are under extortion,
Kidnapping, drug trafficking as well as involvement in homicides. The roots of this problem go back to the 1950s and have now reached an extreme peak.
The film is divided into four parts: Everyday life in Baixada Fluminense  shows photographs of the inhabitants of the place, who appear as if they were shot before the massacre; in fact, they only emerged afterwards. The massacre describes the slaughter and the feelings it triggered. Death Squads deals with the area's killer commands and includes an interview with a professional killer. Everyday life 2 shows the people in Baixada Fluminense and their attempts to process what they have experienced.

The director of the film
I am an anthropologist and have been dealing with violence in Brazil for fourteen years. Unfortunately, violence is one of the keys to understanding contemporary societies. This is even more true of the situation in Brazil. (...) Since the filming took place shortly after the events mentioned, many people were afraid to show their faces. That is why
I decided, for ethical and aesthetic reasons, to leave the canvas completely white in these moments. The statements of the contract killer were in a first cut
can still be heard in front of a black screen while it is white when the relatives tell the victims. The good white and the bad black. But then I opted for the white man's blindness and for the uncomfortable feeling of sitting in a bright cinema while the killer speaks - the opposite of the usually dark cinema. (...) It would have been easier to put the good guys in front of a white canvas and the bad guys in front of a black canvas, but I don't believe in these simple opposites. (...)

There is no music in ATOS DOS HOMENS. The sound has been edited to highlight some elements of the original sound. In some cases we have created an amplified, fake original sound. In this way, an atmosphere was created that the audience would like to involve by hearing steps from people and other background noises in individual scenes. The only significant change in tone occurs when the massacre is announced. For three minutes the screen is completely white and the names of the people who died in the massacre can be read. The pictures in ATOS DOS HOMENS never want to be beautiful. The camera trembles, often we took the pictures without a tripod. In such situations it becomes clear that the entire team was afraid to be there at that moment. The images were hardly processed in post-production. I was not interested in making a war report that relies on violent images and important circumstances, but only for
a short time are important. (...) I knew that I would make a film that would only be seen by an audience many months later. A war
reportage is not interested in what takes place on the edges, such as the life of transvestites, for example. I was interested in the people who live in this area and who sometimes did not even have a special relationship to the massacre. A reportage is characterized by the excessive interest in the visible - and not by the interest in the phantasmagoric white and in the invisibility.

Interview with the director
Question: What are your impressions of Baixada Fluminense?

Kiko Goifman: In Brazil in the 21st century there is a place between Rio de Janeiro and São Paulo where death is the most common way to solve a wide variety of conflicts. What I don't see in my film is the pressure the local elite put on me because they didn't want me to address the violence in Baixada Fluminense. They say there is no violence there, or complain that you only ever show that one side of this place. I noticed an enormous need among these people to "cover the sun with my finger". The conversations with the residents of Baixada Fluminense also made it clear to me that people who live in such a place of violence want to quickly resume normal life.

Question: Why did people who do not want to show their faces still agreed to speak in the film?

KG: The people there are aware that the massacre must not be forgotten. The need to talk was much stronger than the vanity motif that documentary filmmakers are so often faced with.

Question: Why did the contract killer talk?

KG: His thinking follows a very clear logic: If you accept the viewpoint that the police do nothing and that society therefore has to take over their function, then he is a hero, a protector. He doesn't see himself as a criminal. The only reason he doesn't want to show his face is because he knows that what he's doing is illegal.

Question: In the film you mention that you were afraid. Was it a vague fear or did it have very specific causes?

KG: I was scared all the time. The moment you decide not to be afraid anymore and work with a covert camera, you're through below. The covert camera makes work easier and saves time, but in the criminal environment it means treason.

Kiko Goifman was born in Belo Horizonte, Brazil, in 1968 and lives in São Paulo. He studied anthropology at the Universidade Federal of Minas Gerais and received his master's degree in multimedia at the University of Campinas. In addition to documentary and experimental films, he also realized video installations.