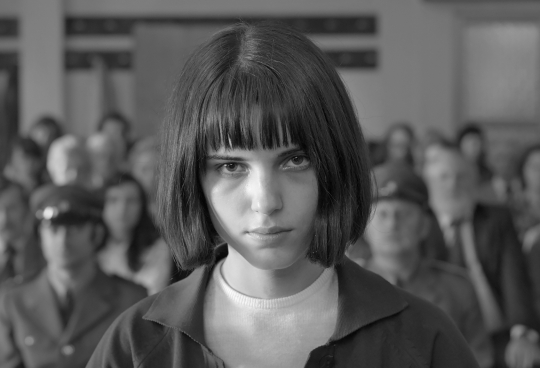 Olga is a complex young woman desperate to break free from her unfeeling family and social conventions. With her Louise Brooks like tomboyish looks she drags herself, chain-smoking, from one job to another until she appears to find her niche as a truck driver. Although she has female lovers she does not form a bond with any of them; instead she clashes, time and again, venting herself in wordless emotional outbursts and other behavioural extremes. Meticulously composed and shot in elegiac black-and-white this film tells the story of the short life of an exceptionally lonely young woman who turns into a mass murderer when, on 10 July 1973 – as she has just turned 22 – she drives a rented truck into a group of people, killing eight. In a letter acknowledging her deed she writes that she sought to take revenge on the world and on those she felt hated her. In spite of clear indications that she was mentally ill she was executed – making her the last woman to be publicly executed in Czechoslovakia.

After producing several documentaries and shorts together, this film marks the directors’ first drama. The film is based on a lengthy period of research which culminated initially in a documentary entitled Everything is Crap.

Born in Stod, Czechoslovakia in 1982, he studied at FAMU in Prague. His 2009 documentary EVERYTHING IS CRAP screened at numerous film festivals.

Studied documentary filmmaking at FAMU in Prague. Whilst there he began collaborating with Tomas Weinreb. JÁ, OLGA HEPNAROVÁ (I, OLGA HEPNAROVÁ) is their debut feature film.