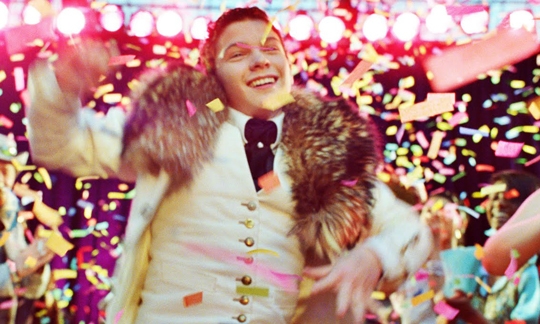 Decked out in toreador bolero jackets, paper hats and parade uniforms, four young people dance and sing in a blaze of light and glitter. They are celebrating Teresa’s birthday – with drugs and music in full flow. It will be a long and turbulent night; a decisive night, too, because Teresa is sixteen and still a virgin. Tonight she’s determined to sleep with Stefan, but Stefan either won’t or can’t oblige. Even the red thigh boots Teresa breaks a shop window to get don’t seem to help. Daniel pines for Lina – especially when she sings her gorgeous songs. Although Teresa’s girlfriend claims to have slept with fifty-three boys, she won’t let Daniel touch her. Lina dreams of seducing a rock star and wants to make it big as a singer. Daniel would give his eye teeth to persuade Lina to sleep with him. But even a crazy spin in a stolen VW Beetle fails to make Lina see who really deserves her affections.
This iridescent Danish musical is a blend of fast-paced sequences and moments of calm that constantly pushes back the borders of the genre. The film marks young singer Emma Sehested Høeg’s fifth outing.