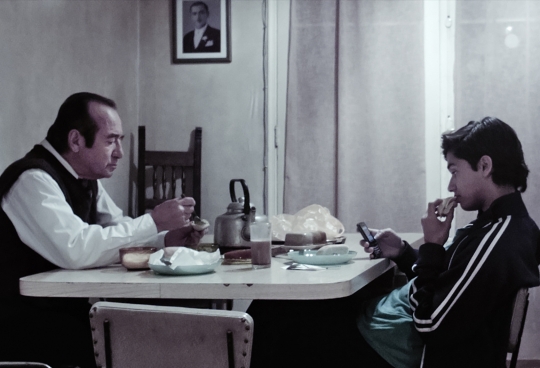 Introverted Juan, manager of a mannequin factory, lives alone with his eighteen-year-old gay son, Pablo. Whilst Pablo blithely studies dance, Juan is hoping that, after twenty-five years at the firm, his boss will consider him for a partnership. When Pablo is badly wounded in a brutal homophobic attack which sees him hospitalised, his father realises just how far they have become estranged. A lack of witnesses and expensive medical bills force Juan to leave the quiet stability of his life for good and reposition himself in a world where there is discrimination. Time and again his efforts come to nought, until one night on the streets of Santiago he makes up his own rules in order to save his son. In March 2012 the murder of an openly gay Chilean man, Daniel Zamudio, by neo-Nazis, shocked the whole of Latin America. This incident inspired Alex Anwandter to make his impressively multi-layered debut. Demonstrating great sensitivity, he traces in the figure of the reclusive father the enormous pressure that exists to adhere to the fixed norms of masculinity – only to dissolve these norms in Pablo’s dream of living a life that is vibrantly queer.

Born in Santiago de Chile in 1983, he is a filmmaker and musician who has made critically acclaimed albums and music videos. The murder of a gay fan in 2012 inspired him to write the screenplay for NUNCA VAS E ESTAR SOLO (YOU’LL NEVER BE ALONE).