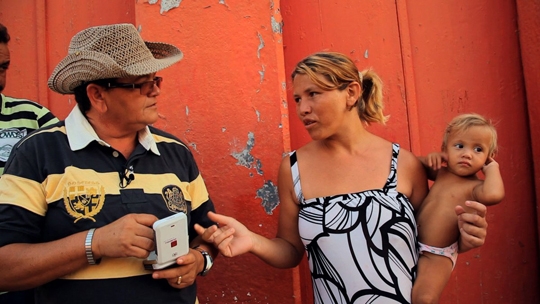 OLHE PRA MIM DE NOVO is a road movie that whisks us away to the wild, semi-arid expanse of north-eastern Brazil. Our tough, cool travelling companion is Silvyo Luccio (‘..I was born a woman, became a lesbian and am now a man’), a thinker in the throes of transition and transformation who finds himself on a journey back into his religious-fundamentalist, deeply prejudiced, traditionalist past. At the heart of old wounds, humiliation and trauma lies an anxiously awaited encounter with a daughter and the hope of familial reconciliation.
OLHE PRA MIM DE NOVO portrays a vibrant human being full of resilience, who has broken free of the sexual catechism’s stale trinity of hetero-homo-bisexuality in order to set off on a different path in search of new horizons. Before him lies a baking hot road through regions marked by grinding poverty, ardent religious faith, superstition and bloated machismo, as well as several encounters with some extraordinary people.