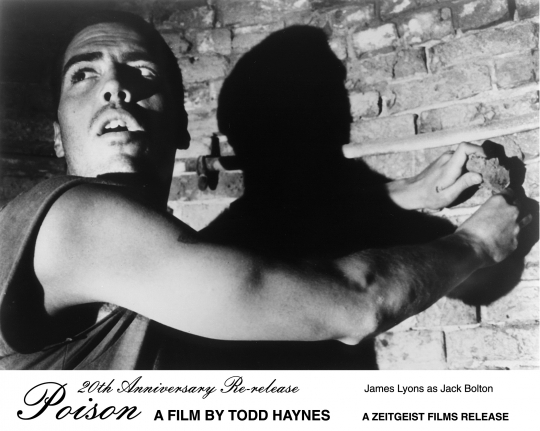 Inspired by the writings of Jean Genet, POISON deftly interweaves trio of transgressive tales - HERO, HORROR and HOMO - that build toward a devastating climax. HERO shot in mock TV-documentary style, tells a bizarre story of suburban patricide and a miraculous flight from justice; HORROR filmed like a delirious ’50s B-movie melodrama, is a gothic tale of a mad sex experiment which unleashes a disfiguring plague; while HOMO explores the obsessive sexual relationship between two prison inmates. (Zeitgeist Films)

When Jean Genet died in 1986, it made me realize that all this time, somewhere in the world, he’d been kicking around. What was he thinking when he opened up the paper? What would he have said about AIDS or Reagan or Jesse Helms? It was around this time that I first started thinking about creating a film that would enable some of these issues to interact with themes from Genet’s work. So I suppose it was inevitable that POISON would be a film about deviance.
Genet - the outlaw poet, thief, homosexual - always aligned himself with the deviant in society. Even late in his life, he seemed more at ease tagging along with the Black Panthers or the PLO than within the literary circles that had first liberated him (he was officially pardoned from a life sentence in 1947 partly due to a petition circulated by Cocteau and Sartre). In Genet’s writing transgressive acts are transformed into sacred rituals, described in luxurious language. Sartre called it the art of making you eat shit, which Genet tricks his readers into eating “by presenting it, from a distance, as rose jam.”
Genet held the world permanently in contempt, vowing from an early age to reject it as it had rejected him. And his resolve is still inspiring me. Whether or not it’s even entirely real, I think it encourages you to consider your own participation in systems of division and in the imposition of laws that make transgression, at times, a necessity.
In POISON, transgression is considered globally in the form of three interwoven stories. And although they’re depicted in distinctly different styles, they are each, ostensibly, the same story. What distinguishes them is not so much in what’s being said as in who’s saying it: who’s telling each story and why. What we learn, for instance, about the monster in a horror film, or of the suspicious subject of a tabloid documentary is very different from what we might learn from Genet, the exiled criminal of Miracle of the Rose. But in all three cases, we encounter a central character that has been shut out by his society as a result of his transgression of certain laws.
POISON’s structure created many challenges, but my primary concern was that it be a source of stimulation for the viewer. Although today’s video-fluent filmgoers experience something very much akin to fragmented narratives every time they flip around the channels on the TV, I still felt it was essential that beneath its braided structure, POISON’s central themes were clearly drawn. With any luck, it’s a film that plays around with the act of telling stories while at the same time asking a few serious questions about the nature of deviance, cultural conditioning and disease.
— Todd Haynes, 1991 (Zeitgeist Films)

Todd Haynes was always interested in art, and made amateur movies and painted while he was still a child. He attended Brown university and majored in art and semiotics. After he graduated he moved to New York City and made the controversial short film Superstar: The Karen Carpenter Story (1988). The movie uses dolls instead of actors to tell the the story of the late Karen Carpenter. The movie was a success at several film festivals, and because of a lawsuit by Richard Carpenter (over musical rights) is very hard to see but it is a true classic for bootleg video buyers. His first feature, Poison (1991) was even more controversial. The film was attacked by conservatives and Christians who said it was pornographic, but it won the Grand jury prize at the Sundance Film Festival. It is now considered a seminal work of the new queer cinema. His short film Dottie Gets Spanked (1993) was aired on PBS. His next feature film Safe (1995) told the story of a women played by his good friend, Julianne Moore, suffering from a breakdown caused by a mysterious illness. Many thought the film was a metaphor of the Aids virus. The movie was a considered to be an outstanding work and one of the best films of the year. In Velvet Goldmine (1998), starring Christian Bale and Ewan McGregor, he combines the visual style of 60s/70s art films and his love for glam rock music to tell the story of a fictional rock star's rise and fall. Dem Himmel so fern (2002), set in the 1950s and starring Julianne Moore and Dennis Quaid, is about a Connecticut housewife who discovers that her husband is gay, and has an affair with her black gardener, played by Dennis Haysbert. The film was a critical and box office success, garnering four Academy Awards. It was hailed as a breakthrough for independent film, and brought Haynes mainstream recognition. With I'm Not There (2007), Haynes returned to the theme of musical legend bio, portraying Bob Dylan via seven fictive characters played by six different actors. The film brought him critical claim, with special attention to the casting of Cate Blanchett as arguably the most convincing of the Dylan characters, for which she received an Academy Award nomination. In 2011, Haynes directed Mildred Pierce, a five-hour miniseries for HBO starring Kate Winslet in the title role. His new feature film Carol (2015) with Cate Blanchett premiered at the Cannes International Festival 2015 to rave reviews and won Best Actress for Rooney Mara.