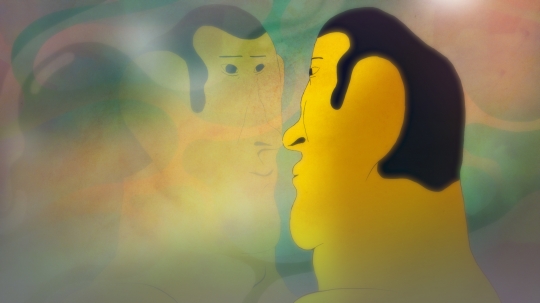 The nipple is the power button that gets the 'cinema of the mind' rolling – or is it in fact a reality? An X-ray reveals it quite clearly: a little man nestled between the rib bones. There he lies and sleeps. The male's host goes crazy, but it doesn't help, he falls asleep exhausted. When he wakes up the next morning, he finds a wound where his nipple used to be, and footprints on the floor. The search begins. But the little man refuses to be intimidated or annoyed or fooled. He confidently sets off to find his place in this gay universe. Who actually loves whom here? Surrealistic and absurd settings come up against a real, everyday world. Unfathomable, inexplicable, sensual, feisty, peculiar.

Born in Hungary in 1989, she studied animation at the Moholy-Nagy University of Art and Design (MOME) in Budapest. Her graduation film, A kíváncsiság kora (The Age of Curious), won an award at Annecy in 2013; her first self-produced film, the Hungarian, Czech and Slovakian co-production Superbia, premiered in the Semaine de la Critique at Cannes where it was the sole animated film in the competition.