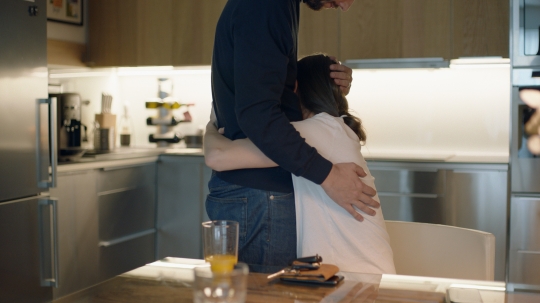 Dana returns to Bucharest but decides not to go home. She pays the taxi driver for the whole night. At the same time, Andrei goes to the gym and afterwards has sex with a man. The next morning, Dana and Andrei meet in their marital bed and spend the day together. Perhaps for the last time. A relationship drama in three chapters that describes the current state of a couple over 24 hours. It is not about psychology but rather capturing moods and atmosphere. Even if the conversation between Dana and the taxi driver is hardly in-depth, everything is said. Dana’s loneliness is palpable when she turns off her phone after talking to Andrei, who for his part seems strangely lost in the apartment of the man he meets for sex. The nocturnal chapters are shot in the 1:1 format and focus on a man and a woman lost in introspection. In the morning, the frame opens out and the two must ask themselves whether there is still room for feelings. What happened? Why can they no longer give each other support despite their shared intimacy and affection?

Born in Bucharest, Romania in 1979. He studied Film Directing. Beside his work as a writer and director, he is also a photographer. Following four short films, Monștri. is Olteanu’s first feature-length film.