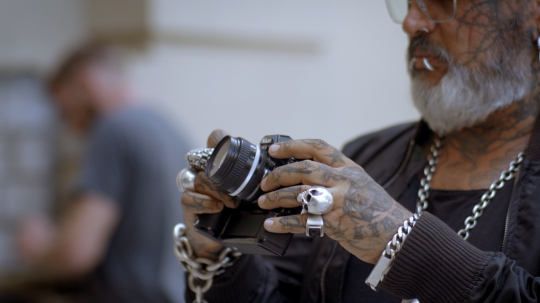 He is best known as the bouncer at the Berlin techno club ‘Berghain’, but Sven Marquardt is also a photographer. Even before the fall of the Berlin Wall, he was portraying East Berlin’s subculture and its protagonists in black and white. Marquardt was not just an observer, but was himself part of the punk scene in which he found his models. After years of nightlife, he has more recently devoted himself increasingly to photography and is once again portraying one of his earlier favourite models, Dominique Hollenstein, known as Dome. Together they recall the attitude towards life of a rebellious and creative youth in the GDR. They also remember the ‘pretty’ punk Robert Paris, who was himself a photographer and also became one of Marquardt’s favourite models. Thirty years after the fall of the Berlin Wall, Robert Paris’s impressive photographs of wastelands and facades in East Berlin recall the radical transformation this city has undergone since then. It becomes clear that the disintegration of a society has also left its mark on these former rebels. Their lives are still marked by their desire to be different.