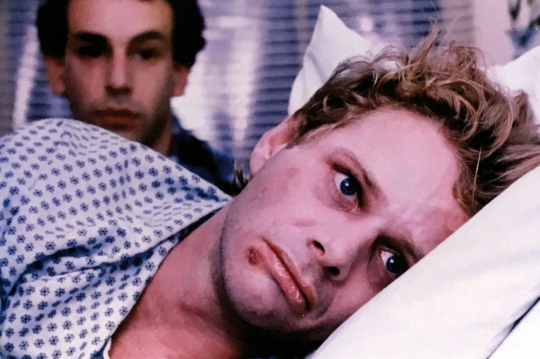 New York in the summer of 1985. What we now know to be the AIDS crisis is approaching its first peak. The realisation is a shock, albeit at this stage only for those affected. It demands a complete rethink in the gay scene, which for the first time in history is functioning with a sense of equality and autonomy; moving away from radical hedonism towards a stronger awareness of the need to care for one another. David is looking after Robert, who is seven years older than him and is dying of AIDS. The two men talk about their young lives; they discuss the irresponsible and discriminatory way in which the government and media are handling the AIDS epidemic, confront their fear of death, and grow closer in their vulnerability. When Robert’s case attracts the public’s attention, the intimate space that is their friendship suddenly becomes highly political.
Arthur J. Bressan Jr. is one of the pioneers of gay independent cinema. Buddies was the first feature film ever to be made about the AIDS crisis. Now, 33 years after its creation, the film with which Edition Salzgeber was founded can be seen in a restored, digitised version.

One of the pioneers of independent gay cinema in the 1970s and '80s, Arthur J. Bressan, Jr. is best known for his 1985 drama, Buddies (the first feature film about AIDS). Working across multiple genres including documentary, narrative, adult and short form filmmaking, Bressan's boldness and artistry as a writer-director earned him both acclaim and controversy over the course of his decade-long filmmaking career.