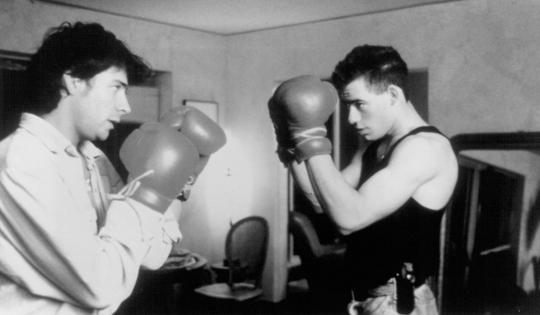 After a film shoot in Morocco, Jean, a thirty-year-old cameraman, returns to Paris and throws himself into his old excessive ways, despite his HIV infection. Roaring through the night in his sports car he relentlessly pursues quick sex with men on the banks of the Seine, at the same time as loving Laura and being in a relationship with Samy. He abandons himself to his increasingly licentious desires which also engulf Laura and Samy in sleepless nights. All three are exhausting themselves on a feverish and emotional rollercoaster ride, electrified by longing and a raging lust for life, walking the line between passion and destruction. Laura’s unconditional devotion opens up a new reality for Jean: he begins to see the others and finally even himself in a new light and to take them into his heart. Based on his eponymous novel, Cyril Collard’s debut both surprises and captivates thanks to its panoply of ideas, unusual camera angles and dramatic leaps that flout all sense of narrative order. Not only did Collard compose the music for his work, he also took the leading role. He was one of the first artists in France to publicly declare his HIV-positive status. He died of immunodeficiency at the age of 35, just three days before his work won four Césars under jury president Marcello Mastroianni.

He made only three films in his relatively brief life but Cyril Collard certainly extended his "15 minutes of fame" to near cult status with the release of his last, the bold and unflinching Wilde Nächte (1992). The notorious French filmmaker, actor, writer, musician and poet was born in 1957 of libertine Parisians who gave him a standard Catholic education in Versailles. Collard forsook a college science degree for a career in film and in the early 1980s finally turned his passion into a reality. He became assistant to director/writer/actor Maurice Pialat with both the film Auf das, was wir lieben (1983) [To Our Loves] and several of his music videos and TV programs. Collard showed more than promise after directing two short films Grand huit (1982) and Alger la blanche (1986), the latter a frank, racially-tense study on passion and violence. His TV-movie _Taggers (1990) (TV)_, in which he also composed the score, scrutinized the life of teenage graffiti artists. In 1986, the dark and handsome filmmaker learned he was HIV-positive. "Condamne amour" (1987), his first autobiographical novel, dealt with the initial awareness of his HIV status. Two years later came his second novel, the powerful "Les nuits fauves" [Savage Nights] (1989), which turned the "politically correct" look at AIDS inside out. The novel thoroughly examined his bisexuality and his defiant, unrealistic and irresponsible perception and handling of his disease. The movie version was released in 1992 with Collard himself playing the protagonist -- a hedonistic and self-important filmmaker with an insatiable sexual appetite who insists on living his prurient lifestyle to the absolute hilt despite his HIV illness, with tragic consequences. This bleak, uncompromising piece both enraptured and enraged the French audience and would become Collard's biggest film achievement. The critics applauded his braveness and controversial approach to such a taboo subject. With Savage Nights, Collard became the first artist ever to be nominated for the three top categories of the French "Cesar" Awards -- Best Film, Best Director and Best First Film. The film won an amazing four awards -- Best Film, Best First Film, Best Editing and Best Female Newcomer (Romane Bohringer). Not so ironically, Collard himself died of AIDS at 35 on March 5, 1993, only a few days before he was to reap his film awards. A posthumous book entitled "L'ange sauvage" and collection of Collard's poetry "L'animal" were published in 1994.