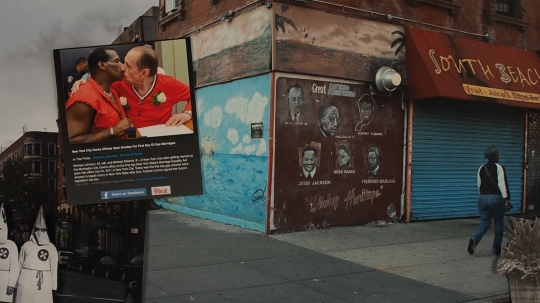 FALSE BELIEF is the love story of a couple caught up in the gentrification of a neighborhood that is wiping out a seminal African-American cultural legacy and displacing its original residents. In 2008 Norwegian artist and filmmaker Lene Berg moved in with her partner, a Black New York publisher, who will be referred to as D. After giving a statement to the police about being harassed by his neighbor in Harlem, D. was arrested, prosecuted, and imprisoned. But for what exactly? His arrest initiated a journey over the course of which D.’s faith in the American justice system put everything he cherished in life at risk.
Berg attempts to untangle the circumstances around the criminal case through D.’s candid storytelling accompanied by her own narration, driven by collaged images, court documents, and still and moving images. By scrutinizing what at first seems to be an isolated minor case, False Belief uncovers the larger picture of a corrupt justice system that employs incarceration as a political and economic weapon.

Lene Berg, born in Oslo, Norway in 1965, studied film at the Dramatiska Institutet (University College of Film, Radio, Television and Theater) in Stockholm. In 1997 she directed the feature film En Kvinnas Huvud (A Woman’s Head) and has since produced mixed-media artworks and installations for galleries, museums, and public spaces as well as a number of short films and two more feature-length films.