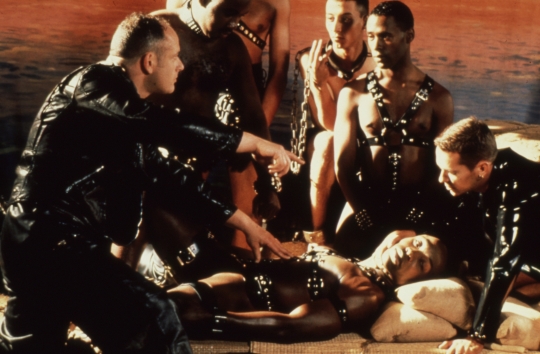 A young white man visits a gallery of old master paintings. When the museum closes, he stays behind, arousing the sexual fantasies of an older black museum attendant. In one of these fantasies, the 19th-century painting ‘The Slave Trade (Slaves on the West Coast of Africa)’ by French artist François-Auguste Biard metamorphosises into a group of leather-clad gay men. With an activist’s commitment, Isaac Julien takes a look at the sexual and racist dynamics of power from a cultural-historical perspective. Made with the support of the Black Audio Film Collective (1982-1998) in a period under the sway of Thatcherism and the AIDS crisis, the film impressively and poetically explores the topics of imperialism, queer self-determination, lust and death.