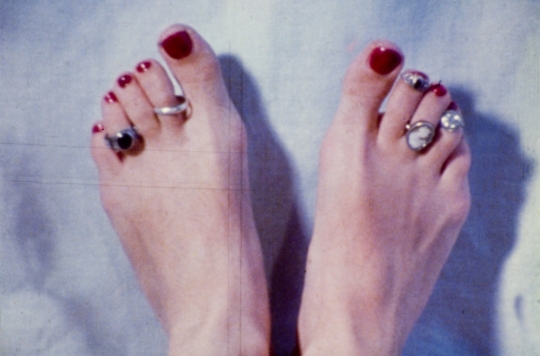 A tie or lace? After trying on numerous treasures from New York’s second-hand stores, and extravagant fashion accessories, Karola Gramann decides on a traditional dinner jacket with cummerbund and bow tie. We then see her posing & vogueing to Bryan Ferry’s “These Foolish Things”. These shorts are an early gender bend that evoke Kenneth Anger’s biker etude SCORPIO RISING (1963) and even anticipate the Madonna phenomenon.

Christine Noll Brinckmann was born of German parents in China where she spent her early childhood. She attended Bonn, Berlin and Frankfurt Universities, studying English literature, Latin and Art History.

Noll Brinckmann began to make experimental films in 1979. Her films have been shown at many international festivals. She won the critic's Best Westgerman Short Film Award at the Oberhausen Festival in 1984 for Half a Life and she received a grant from the State of Hessia to make her found-footage film The Father.

Brinckmann's scholarly writings include books and articles on film narratology (focusing mainly on the classical Hollywood style), on American documentary, on the aesthetics of experimental film, on feminist issues, on the effects of empathy and on color in film.