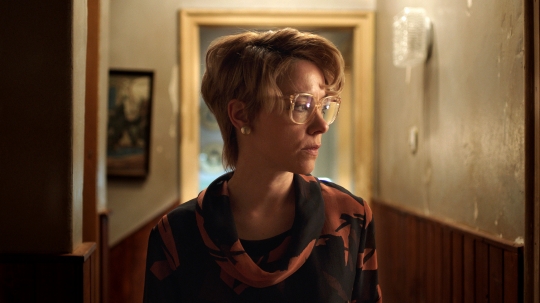 Belgrade in 1993. Serbia is at war, people are suffering on account of sanctions and inflation, but everyone is doing what they can. Mother Marijana is holding the family together. Her husband only raises his gaze from the floor when loving moments with his young daughter Minja brighten an endless string of daily chores. It is Minja’s eighth birthday. Instead of a cocker spaniel of her own, there’s the neighbour’s three-legged dog to play with, and the cake has been made with margarine instead of butter. In the living room, she and her classmates leap about dressed up as Ninja Turtles while the adults congregate in the kitchen. An ex-girlfriend rubs her new relationship in her ex’s face, there are heated discussions about who is to blame for the collapse of Yugoslavia and they all agree that it doesn’t take more than a bit of sperm to become a mother. A boozy evening of unrestrained smoking, flirting and drinking takes its course. An intimate and honest insight into the life of one family in which political identities clash and entangled relationships cause conflicts.
Milica Tomović stages a party that is both lovingly observed and sharp-tongued, in which all the pent-up tension of uncertain times is released.

Born in the former Yugoslavia in 1986, she graduated from the Faculty of Dramatic Arts at the University of Arts in Belgrade with the omnibus film October, which screened at festivals including in Cottbus, Trieste and Sofia. Her short film Transition premiered in Locarno in 2016 and went on to screen at Toronto, Belgrade and Sarajevo, where it won Best Short Film. She has directed five episodes of the successful Serbian television series Morning Changes Everything. Kelti is her debut feature film.