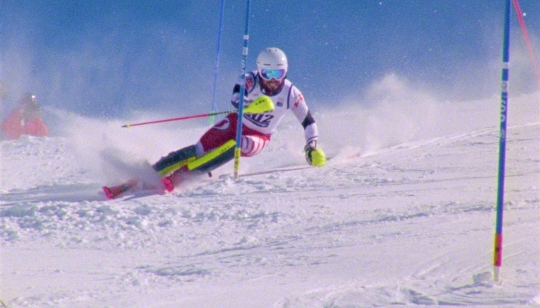 There’s a monster in the Nahuel Huapi Lake. In the twilight, it spreads itself out across the surface of the water like a taut cowhide, grasping at its victims with sharp claws. Another monster also lurks in the surroundings of the lake, which is close to Bariloche in the Argentine Andes. It is called Capa Negra: the Black Cape. It haunts the ski slopes by night and should be avoided at all costs.
Monsters from the legends of the Mapuche find their way into Manque La Banca’s feature-length debut Esquí via various twists and turns. Once there, they interact with the film’s other characters: elderly Austrians who claim to have brought the sport of skiing to Bariloche; skiers who shoot down the mountain in scenes made all the more breathtaking through generous use of slow motion and repeated stops and starts; the local residents of a poor neighbourhood, who take part of the direction of the film into their own hands; and finally the filmmaker himself, who points his hairy buttocks at the camera. Esquí is so precious because it marks the point where hipster dedication to form and the political consciousness of the woke generation start a beautiful friendship.

Born in 1990 in Bariloche, Argentina. He studied art as well as film and photography and works as a filmmaker, performance artist and musician. He works with Super 8 and 16mm film and is a member of the analogue film collective LaborBerlin.