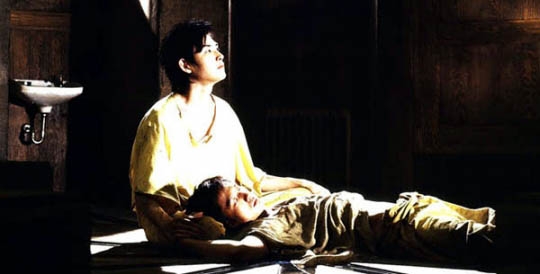 Jun Ariyoshi works in a gay bar. One night, one of the customers pesters him and a terrible fight breaks out during which Jun kills the man. Jun does not show the slightest sign of remorse and is put in prison. One of the inmates is a young man named Shiro Kazuki, who wears strange-looking tattoos and whose remarkably penetrating looks can kill. From the outset, Shiro makes brutality and violence his trademark and, as a result, soon makes his way up the hierarchy of those behind bars. Jun, who is more introverted, feels drawn by Shiro’s strength and decisiveness. Shiro accepts Jun because he is the only one on the inside who sees him for what he is. They gradually become friends, and then, a couple. Determined to let nothing and no-one come between them. Then, however, an incident occurs. A prison warder is witness to a young man strangling another prisoner with all his might in the communal hall. Shortly afterwards, the victim breathes his last. It is Shiro. The young prisoner turns around. The guard observes the inmate’s tear-stained face as he admits: “I did it.” It is Jun. Japanese director Takashi Miike is well known for films that make a decisive break with taboos and conventions, and for his ruthlessly graphic portrayal of violence. In this film, however, he is also keen to find an explanation for the outbreak of violence. What could have caused Jun’s terrible deed?