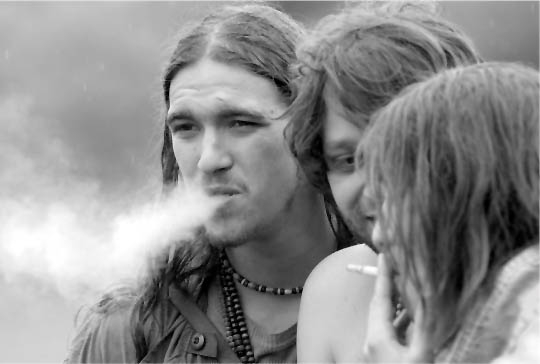 Sex, drugs and rock ’n’ roll in a communist police state. The film takes place in the 1970s in the northern part of Soviet-occupied Czechoslovakia. It centers on anti-hero Olin, who has just been released from a psychiatric hospital, where he ended up after slashing his wrists to avoid military service. A few weeks after his release, he becomes an important figure in the underground scene, attracting increasing attention from the forces of order. One day he decides to flee to the West, as he has always dreamed.

An existentialist attitude
Interview with the director

Question: How did work on Báječná léta pod psa (The Wonderful Years That Sucked, 1997), based on the novel by Michal Viewegh differ from working on this movie, based on a book by Jan Pelc? Both authors deal with the same period, yet their works are quite different.

Petr Nikolaev: The Wonderful Years was a commissioned project. The project’s funding was secure, and I accepted the offer because it allowed me to retell a story about that time with a humor and distance that was liberating for me. On the other hand, IT GONNA GET WORSE offered an opportunity to fully go back to my existentialist feelings from back then, in an intense and uncompromising way. When I read the book for the first time in the 1980s, it was quite clear to me even then that it was movie material, but back then it was unthinkable to produce such a movie. Those people came together slowly like in The Magnificent Seven; for many of them it was their first time, but their inexperience was compensated by motivation and desire. It was my hardest and at the same time my most beautiful shooting. For all of the participants, it was a trip that we will not forget for the rest of our lives.

Question: Most of the crew were students. How was it working with them?

P.N.: The movie was made with a lot of enthusiasm. Those people came together slowly like in The Magnificent Seven; for many of them it was their first time, but their inexperience was compensated by motivation and desire. It was my hardest and at the same time my most beautiful shooting. For all of the participants, it was a trip that we will not forget for the rest of our lives.

Question: Your main co-stars are lesser-known actors and non-actors. How was it working with them? Were they reliable?

P.N.: I was scared of that, but at the same time I knew that no slick actor would do. It had to be authentic and crude. I hope we managed this by casting Karel Žídek in the main role of Olin. From the very beginning, I knew that such open-minded people sometimes have problems with reliability, but they had enthusiasm, and none of them betrayed the project. Among others, the band called ...a bude hůř appears in the movie, and the band will also play occasionally at some of the screenings. That brings us to one of the most interesting facts about the movie: the producer, Čestmír Kopecký, decided not to go for the classical distribution in movie theaters and multiplexes. In a space typical of con sumerism and mass entertainment, the movie would lose a large part of its message. So the idea is that there will be only three copies that will travel to clubs, pubs, and music festivals, maybe accompanied with a concert by the band ...a bude hůř. In such non-sterile surroundings, the audience can have a drink and talk while they watch, making the black-and-white movie a much more intense experience. Similarly, there is no plan to show the movie on TV or to distribute it on DVD, thus to a certain extent avoiding “self-competition.” An interesting moment will occur when the distribution becomes a part of the artwork itself.