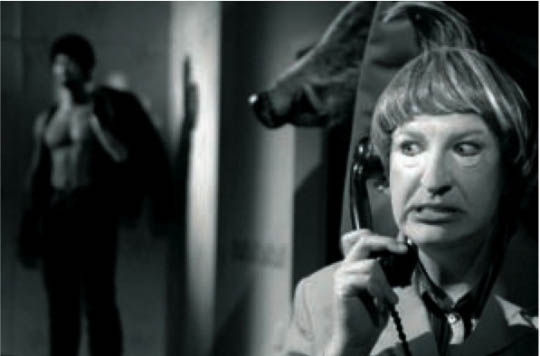 On the way home from a coffee and a chat with her best friend, Karin Höhne, a retired primary school teacher from Haselhorst in Berlin, is witness to a brutal murder in a passing local train. A young woman falls victim to an axe murderer. Unfortunately, the police – particularly visiting British superintendent Rock Milchester – consider the elderly lady’s statement to be merely a tall story that she has concocted. Their suspicions appear to be confirmed when they cannot find a body. There’s nothing else for it – this hale and hearty matron will simply have to take the case in hand herself. Her friend Rosa is quickly convinced of her plan and in no time at all detective Höhne begins her investigations. A hot tip on the railway embankment leads the two sleuths to Horst Brüller’s renowned hairdressing salon in Berlin’s Wilmers dorf district, where the parlour’s managing director, Gisela Drache, runs a tight ship. Nevertheless, in spite of her advancing years, Ms Höhne manages to get taken on as a trainee hair designer. Before long, her magic fingers not only impress one of their customers, film diva Veranda Strunzig-Lopez, her expertise also comes to the attention of the business’ alcoholic boss and his slick lover Bruno. A poisoned wig and several skeletons in closets soon confirm Ms Höhne’s fears that, with the major hairdressing fair “Snip Away” almost upon them, something is most definitely rotten in the house of Brüller. What lies in the salon’s gory cellar, why does Daisy Müller keep fainting, and just who does plastic surgeon Hektor Messerschmidt have on his conscience? What is stylist Winibald Glücklos’ dark secret and why does Riccardo Stecher, the salon’s gay top stylist, have to die? Loosely based on the classic Miss Marple story, 4.50 FROM PADDINGTON, director Jörn Hartmann tells the story of a series of unsolved murders in Berlin’s beauty industry.