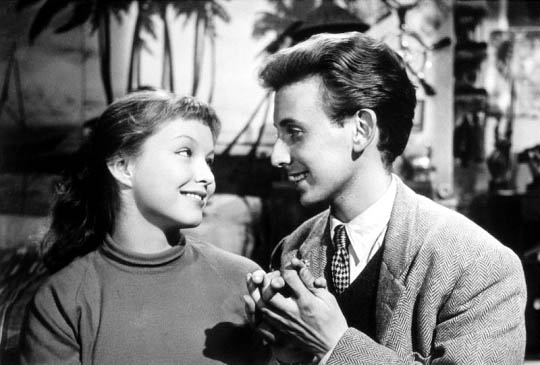 After studying the intricacies of justice in JUSTICE EST FAITE - JUSTICE IS DONE (France 1950) and capital punishment in NOUS SOMMES TOUS DES ASSASSINS / SIAMO TUTTI ASSASSINI - WE ARE ALL MURDERERS (France / Italy 1952), André Cayatte , ex-lawyer, now turns his searching camera on adolescent delinquency and parental responsibility. Result is a jolting social yarn which covers too much territory and has a tendency to preach to the detriment of the drama. It forces its hand in fitting everything into its legal, pamphlet-like plea. It will do well on word-of-mouth here. For the US, this would be need special handling for arty situations, but doesn't shape big because of its downbeat theme.The banding together of five adolescents, who decide to flee Paris to a safe desert isle after being driven to panic over fear of a new war (this is in 1950) and lack of love and comfort from their selfish parents. They find they need money to get away and decide to rob lover of one boy's mother. But a night policeman comes along, and he is accidentally shot and killed. Two of the boys in terror slay the young Jewish boy who they think will talk. Another boy confesses after a suicide attempt, and they are put on trial. Film uses a  flashback technique at the trial as the bereft parents all question themselves, and begin to realize their guilt.Cayatte has held this literary-type film together and generated many scenes of intense feeling. Lensing and editing is top in keeping this complicated story always intelligible. Marina Vlady lends a lovely face as the girl in the gang. Youths are all well played, with Roger Coggio as the young Jewish boy a standout. Jacques Fayet , Clément Thierry and Jacques Chabassol all do well. Adults are also finely played with Bernard Blier  moving and bewildered as the father of a daughter he no longer understands. Much of the excess haranguing, such as the professor's countless arguments with his son on Communism, possibly can be sheared away to make this more palatable for special US situations. (Mosk. (Gene Moskowitz) in: Variety (Hollywood), 7.4.1954.)

André Cayatte (b.1909 in Carcassonne, Aude, France) was a lawyer turned novelist and journalist, then screenwriter in 1938, after which he became a film director in 1942. He was known in France from the 1940s to the 1970s for uncompromising films examining the complex ethical and political dimensions of crime and justice in the French judicial system. He saw film as a stimulus for reform, advocating social concerns, and in this way was much a seminal forerunner to Costa-Gavras. Cayatte wrote or co-wrote the scripts for all of his films (his collaborators often including Charles Spaak). He was largely considered the 'Sidney Lumet of France'. Highlights of his career: "The Lovers of Verona" (1949), with dialogue by poet Jacques Prévert, is considered by many to be Cayatte's towering achievement, a first international success, a story loosely based on William Shakespeare's "Romeo and Juliet". His film "Justice is Done" (1950) won the Golden Lion at the Venice Film Festival and was one of the first films to deal with the moral acceptability of euthanasia. "We Are All Murderers" was one of the first strong indictments against the death penalty; it focused on a bleak vision of prisoners who were waiting to be executed and received a special award at the 1952 Cannes Film Festival. "Piège Pour Cendrillon" (1965) (remade in the UK as "The Cinderella Trap") was a tense thriller based on a Sebastien Japrisot novel. In 1967 "Les Risques Du Métier" starring famed Belgian singer Jacques Brel dealt with the tragedy of a school teacher,accused of abusing his pupils. "Mourir D'Aimer" (1971) was based on the real life Gabrielle Russier affair and in an highly emotional manner depicted the forbidden love of a teacher for one of her students. The film would introduce actress Annie Girardot, who was to become a French star and his favorite actress. "Il N'y A Pas De Fumée Sans Feu" and "La Raison D'Etat" were both political thrillers. "A Chacun Son Enfer" was in particular a highly disturbing and provocative criminal thriller, focusing on the unbearable suffering of the mother (Annie Girardot) of a kidnapped daughter, and is considered Cayatte 's most terrifying work. "The Mirror Has Two Faces" (1958) was one of the forerunners of movies dealing with the consequences of plastic surgery, namely the emotional and psychological repercussions on the relationship between a husband and a wife. The film, starring Michelle Morgan, was later remade by Barbara Streisand as "The Mirror Has Two Faces" (1996). Cayatte published six novels before entering the film industry. The opus of his French work, in particular his socially conscious films, can be summed up as a sincere moral plea for a more humane form of justice in the face of rigid and difficult systems of laws and regulations. He exclusively worked for TV in the eighties; he died in 1989 in Paris, France, age 80.