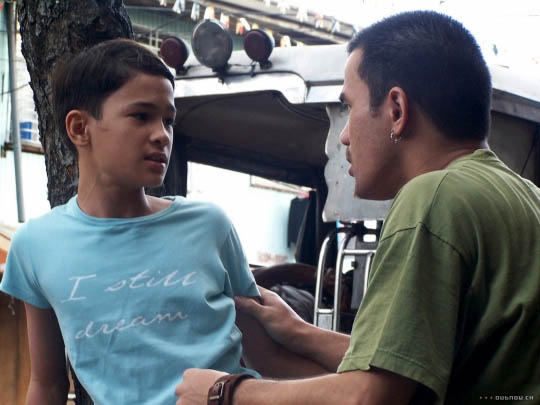 This film pits the purity of first love against the poverty and corruption that dominate the slums of Manila. The Philippine capital is home to twelve-year-old Maxi, who comes from a poor family. Maxi cleans the house, cooks, washes clothes and repairs tattered jeans for his relatives, who are all petty thieves. He even supplies them with the odd alibi, when needed. Maxi's homosexuality is accepted by his nearest and dearest. Loved and protected by his relatives, Maxi has a calming influence on the family and is the one in charge of the day-to-day running of the household. Things work out fine until Maxi meets Victor, a respected, principled policeman who awakens Maxi's dreams of a better life - on the straight and narrow. This is a recipe for disaster as far as the family is concerned,

Auraeus Solito : “Seven years ago I went to the island of Palawan in the southern part of the Philippines and rediscovered my roots in the indigenous population. I swam in the lakes, went out walking by moonlight, learned to hold on to the precious life of our endangered species and dance the ritual of truth according to ancient holy rites. I returned to modern-day Manila where I grew up and began making this film. But I now had a much better understanding of my old stamping ground. I'm convinced that the attention this film attracts will encourage digital filmmaking in the Philippines. The digital revolution has the potential to erase the difference between Third and First Worlds. Just because we're poor doesn't mean we don't have any imagination. ”

Auraeus Solito was born in Manila. He studied theater arts at the University of the Philippines and took a summer filmmaking workshop at the Mowelfund Film Institute, which launched his career in filmmaking.