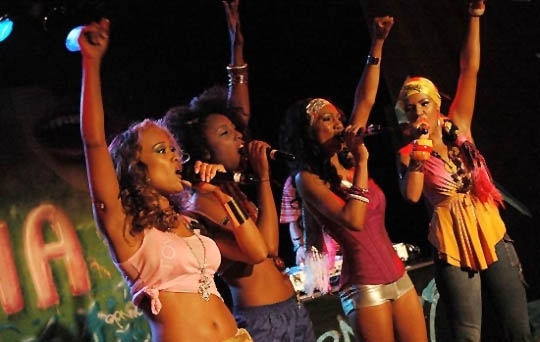 Preta, Barbarah, Mayah and Lena have all been friends since childhood. They live in Vila Brasilândia on the outskirts of São Paulo. At the moment they're still working as backing singers, but their dream is to have a group of their own. Calling themselves "Antônia", they decide one day to quit working as a backing group and make their dream reality. Getting themselves a manager, the talented singers start gigging the clubs and well-todo parties with a repertoire of rap, pop, soul and MPB ( Música Popular Brasileira). It's a hard slog, but the four girls are certain of their goals: money, fame and a life beyond the dismal environs of Vila Brasilândia. But just when they begin to experience a bit of success and it looks as though they might find a way out of their miserable lives, time and again they find themselves up against the pressures of their daily grind, ever-present poverty, male chauvinism and violence. In a jealous moment Preta and Mayah have a fight, Lena bows to pressure from her husband, who doesn't want her to rap, and Barbarah, a skilled Kung Fu fighter, becomes embroiled in the death of her brother's friend. Having almost done themselves out of their opportunity to escape the schlimazel of their lives, the girls must now fight in order to hold onto their dream of another life. And they must sing together again.

The São Paulo -based filmmaker Tata Amaral in one of most talented and awarded filmmaker o Brazil's recent filmography. Her work stands out for its experimentation and originality.

Hr debut feature " A Starry Sky" (1996)was considered by the critics one of the three most important Brazilian movies of the 90's and was screened in Iffs such Toronto, Rotterdam, and Berlin. Her second Feature, "Throught The Window"(2000) was awarded with severals nation and international prizes.

"Antonia" (2006), her third feature film had its world premiere at Toronto IFF, it was acquired by HBO Latin America and FOX Channels, and it inspired the homonymous TV series exhibited by Tv Globo, Brazil's biggest Tv channel. The series was nominated for the international Emmy Awards in 2007.

Her film "Today" (2013) was the biggest winner at 2011s Brasilia Film Festival of Brazilian Cinema and "Bring Inside"(2016) was awarded Best Film by the audience at São Paulo Latin American Film festival in 2015 She also directed the documentary Tv series "Rua!"(2013), for the São Paulo Municipal Department of Human Rights, and "Causando na Rua"(2016), for CineBRASiLTV channel. She also directed episodes for the 2nd and 3rd seasons of HBO's Original Brazilan TV series Psi (2015- 2016) Currently, Amaral is working on the post-production of her latest feature, "Express Kidnapping", which will be released in the first half of 2018, and on the 2nd season of the series "Causando na Rua".

Currently (2017), Amaral is working on the post-production of her latest feature, "Expreess Kidnapping", which will be released in the first half of 2018, and on the 2nd season of the Tv series "Causando na Rua".