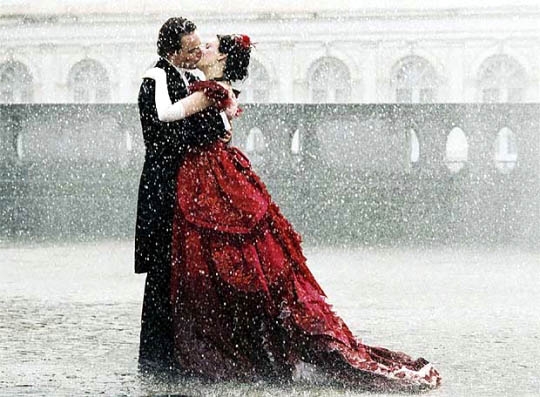 "I've loved you ever since we first met, and I will love you till the day I die." England in the year 1905. Angel Deverell is an extremely talented young writer from a working-class background. Her escapist, romantic novels are hugely popular. Before long all the dreams of a young woman of her age are fulfilled. But is it possible to have success, fame and love all at the same time? Her radiant rise is followed, inexorably, by her decline ...

François Ozon 's film is based on a novel published in 1957 by British writer Elizabeth Taylor (1912-1975). Ozone encountered " Angel " about five years ago: "I sensed immediately that a screen adaptation of the book would provide me with an opportunity to deal with an entire romantic universe; it would also give me a pretext to create a broadly sweeping epic in the style of melodramas of the 30s and 40s, revolving around the rise and fall of a flamboyant personality. And then I fell in love with the character of Angel, who I found amusing, fascinating and finally, deeply touching. In the book, the protagonist often appears grotesque;Elizabeth Taylor's treatment of Angel - her writing and her behavior - is very ironic. I didn't think it possible to follow a figure in such a negative light for two hours; it is important to be charmed by her as well. Scarlett O'Hara immediately jump to mind, a figure who, as the English say, you love and hate at the same time.

Born in Paris, France in 1967, this director and screenwriter studied at La Fémis film school and is now one of the most renowned filmmakers in his country. His work has already screened in the Berlinale Competition four times, with the ensemble cast of one of his most successful films, the comedy 8 femmes , winning the Silver Bear in 2002. In 2012 he was a member of the International Jury. He has made four films with Charlotte Rampling who this year is being presented with the Honorary Golden Bear for her lifetime achievement; Sous le Sable and Swimming Pool are both screening in the Homage .