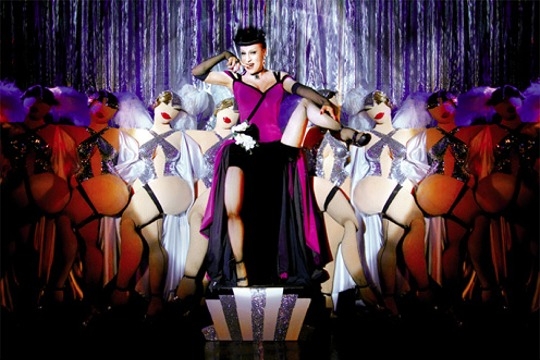 Arias With A Twist: The DocuFantasy

Joey Arias ennobled the performance art of being a drag queen. Arias is a personage who stood for the connection between the avant-garde and pop music as well as the revival of Billie Holiday 's divine voice. Joey was Andy Warhol 's muse. Klaus Nomi , David Bowie and Iggy Pop performed with Arias, who made a name for himself in Las Vegas as the »Mistress of Seduction«. "Arias with a Twist", his show with puppeteer Basil Twist , is the focus of this film.

Joey Arias is a New York institution. He lived and worked with legendary musician Klaus Nomi until Nomi's death in 1983. However, he has long since stepped out of Nomi's shadow to gain fame in his own right as a performance artist, cabaret singer and drag artist.
New York puppeteer Basil Twist is just as popular in his own genre. Ever since his life-size puppet interpretation of Hector Berlioz “ Symphonie fantastique ” - which is performed underwater to live accompaniment by renowned orchestras - he is widely regarded as the most significant proponent of his art.
“ Arias with a twist is the title of a joint project created by these two artists.Their production is a glittering stage fantasy which, since the summer of 2008, has been enchanting audiences in both New York and on the West Coast of the US. In the piece, Joey Arias brings to life fantastic adult marionettes of showbiz greats such as Billy Holiday and Joan Crawford . These puppets perform in front of a chorus line and are clad in raunchy costumes especially created for the evening by Thierry Mugler .
This documentary describes the evolution and making of Arias' and Twist's joint project. Original footage is flanked by a rich spectrum of archive material that points out precursors of “Arias with a Twist” such as films by and with Andy Warhol, works by Jim Henson andKeith Haring , as well as hitherto unseen film excerpts featuring David Bowie, Divine , Grace Jones and Klaus Nomi.

Bobby Sheehan began his eclectic career in high school when he created fashion videos and print campaigns for the New York fashion emporium, Parachute. While attending New York University's Tisch School of the Arts, he opened his own production company where he directed and produced a wide variety of motion picture work, all the while continuing his photographic career capturing the punk rock scene. His photos of the Clash, Ramones, Blondie, Ultravox, 999, Elvis Costello, and all of his fellow rebellious friends were features in such publications as: Circus Magazine, Creem Magazine, The Village Voice, Soho News and New York Magazine.

Sheehan's first foray into the feature world was the critically acclaimed "Seed" (IFC Films) of which Variety raved: "This visually captivating spiritual movie journeys across America with innovative cinematic form. A highly imaginative, collage like, experimental epic that relentlessly strips away at the boundaries between features and documentaries." Sheehan coined the phrase "docufantasy" to describe his love letter to the arts: "Arias With A Twist: The Docufantasy." This feature goes beyond a documentary profile of two extraordinary artists - Joey Arias & Basil Twist - by examining the creative spirit and the tenacity of gifted individuals who express themselves through art. "Listen To The World," is a feature documentary about the first-ever museum to house instruments from all over the world, and "I Thee WED" a short film for the United Nations featuring their Goodwill Ambassador Gisele about the importance of preserving our planet and premiered the annual World Environment Day that was held in Rwanda, June 2010.

Sheehan wrote, produced and directed the film "Cayman Went," a narrative feature about a pretend hero forced to become a real hero. The feature premiered theatrically in June 2009. Sheehan's television credits include "The Talent Collector", which he wrote, produced and directed for AMC; the reality series "Repo Men" starring, Vincent Pastore, for TLC and Discovery Networks; the documentaries "Jeff Koons: Beyond Heaven," "Mr. Prince" which tells the extraordinary story of the legendary Broadway Producer and director Hal Prince and the TV series "View Finder" which explores the world of visionary artists such as Dean Chamberlain and Michael Colavito and the original series "Motor City Rising" for Ovation which shines a light on the vibrant, entwined artistic culture of Detroit and the ways its denizens are reshaping the disheveled city in ways both small yet profound.

As a fine arts photographer Sheehan has been exhibited nationally in galleries such as: Bridgewater Lustburg in New York, Stephen Cohen Gallery in Los Angeles and the Vision Gallery in San Francisco. Sheehan graduated from NYU's film division of the Tisch School of the Arts and is the co-founder of New York based Working Pictures with his wife Sara Feldmann Sheehan.