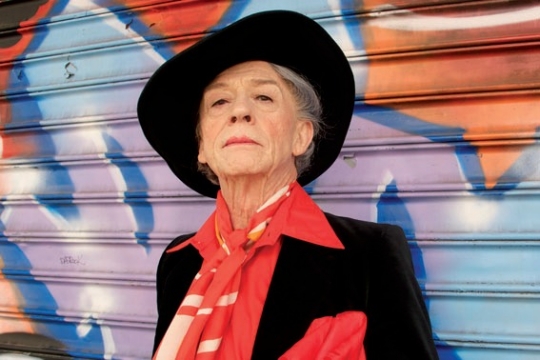 An Englishman in New York

In 1975, at the age of 66, openly gay writer Quentin Crisp has given up on finding fame and so it comes rather as a surprise when the British TV film THE NAKED CIVIL SERVANT, which is about his life so far, makes him a celebrity overnight. However, while Quentin had successfully pushed a nation out of the closet, the nation “had a name to put to their demon.” Refusing to return to anonymity and following an invitation to New York, Quentin finds himself in the country where he is welcomed with open arms. What was seen as freakish in London is normal in the Big Apple and having secured his Resident Alien status for his “unique qualities”, Quentin becomes the toast of New York society. In his off-Broadway show he also advises people on, “how to be happy”. But it's the gay community this time who now condemn him. In one of his shows Quentin unwisely describes AIDS as “a fad.” The consequences are devastating. His hit show is pulled… But it is his friendship with the young and gay artist Patrick Angus that proves to be a profound revelation. Patrick is in search of his “Great Dark Man”, a journey that is leading him to disillusion and destruction. Patrick confesses that he agrees with Quentin – homosexual love is impossible. Lately Patrick has contracted HIV…

John Hurt first played Quentin Crisp over thirty years ago, in 1975 in Jack Gold’s legendary television production of THE NAKED CIVIL SERVANT. The film also proved to be an international success in cinemas. In the first part of his memoirs, Britain’s most famous homosexual depicted his life in anonymity. AN ENGLISHMAN IN NEW YORK now tells the story of his years of fame.
In 1981 Quentin Crisp accepts a theatrical engagement in New York. His agent, Connie Clausen sees to it that, on account of his ‘particular achievements’, he is awarded an indefinite residence permit as a ‘resident alien’. She also manages to organise regular bookings of his one-man-show, ‘How to be Happy’. Before long, the word is out and Quentin Crisp’s appearances are popular with more than a select few. One day, Connie introduces Crisp to Phillip Steele, the publisher of “The Village Voice” magazine. The two men soon become friends and Crisp – a genuine party animal who adores premieres – finds plenty of opportunity to parade his flamboyant style and sharp-tongued wit.
However, his careless comment during one interview, that Aids is merely ‘a fad’ earns him more than a few enemies in New York’s gay community and eventually causes a rift between himself and Phillip Steele. He subsequently strikes up a close relationship with a young artist named Patrick Angus. When Angus contracts Aids and later dies, Crisp succeeds in persuading Steele to print Angus’ paintings in “The Village Voice”. The two men grow close once more. Their new relationship proves to be more enduring than the first; it is still going strong when performance artist Penny Arcade introduces Quentin Crisp to a hip, young audience who revere his iconic style – even at the grand old age of ninety.

In 1990 Jonathan Nossiter made a documentary on Crisp in RESIDENT ALIEN.

Richard Laxton started his career with the short film I Bet It Will Rain in 1992. Initially he mainly worked for TV production, and was nominated for British Academy Film Awards for several of his TV episodes. In 2006 he made his first feature film Life and Lyrics. His next feature films were Grow Your Own in 2007, An Englishman in New York in 2009 and Effie Gray in 2012. His last production for TV were the twelve episodes of the series Him & Her in 2011. In 2013 he realized a biographical film entitled Effie Gray.