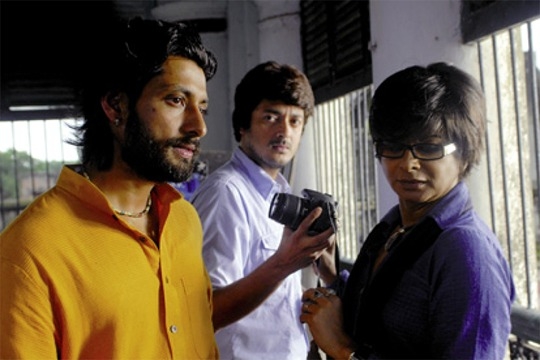 In traditional Bengali theatre it’s not unusual to see men in female roles. One of the last surviving androgynous stars of Bengali theatre is Chapal Bhaduri. A young gay filmmaker decides to make a film about this stage legend and asks the 71-year-old thespian for an interview. A concentrated conversation begins that soon goes beyond the boundaries of a conventional interview. As the actor describes some of the painful moments in his life as a stage heroine, the young filmmaker and his bisexual cameraman feel as if they too have had to overcome similar experiences and conflicts in their lives.
Two narrative strands unfold, one of which follows the interview, while the other portrays, in dramatised scenes, the life of the ageing stage diva. Beyond the contrasts of objective and subjective strands, distance and intimacy, boldness and shyness, a deep empathy evolves between interviewer and interviewee.
Until recently homosexuality in India was a criminal offence subject to punishment. The idea for AAREKTI PEMER GOLPO came about before this misanthropic legal practice was abolished. However, little has changed as far as the nation’s widespread antipathy vis-à-vis homosexuality is concerned, and so the film’s subject is as relevant today as it was prior to the reform.

Kaushik Ganguly: born in Calcutta on 4.8.1968, he studied Bengali literature. He began writing professional screen- plays in 1987 and has been a director since 2000. His socially committed films have received numerous awards.

born in Calcutta on 31.8.1961. After studying economics he joined an advertising agency and made his first feature work, a film for children, in 1992. He has since made numerous, often award-winning pro- ductions.