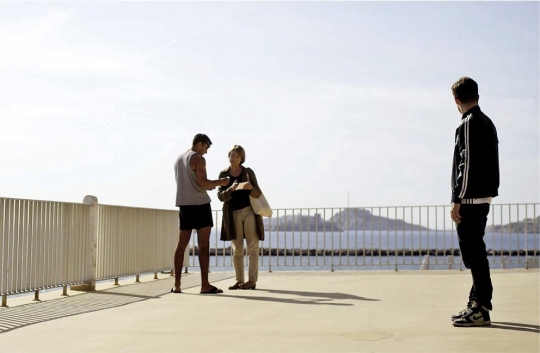 Simon, a young German doctor, who is living and working in Marseille, doesn't give any news. His apartment is empty. Valerie, his mother, is desperate to find him and travels to France. She asks Jens, the former boyfriend of Simon, to help her out on this research. But one trace after another dissolves into thin air. Is Simon just travelling or does he not want to be disturbed? In his college Camille and the young car salesman Jalil Valerie finally finds two people, who both in their specific ways have an extraordinary relationship with Simon, which they deny in the beginning. For Valerie and Jens the trip develops into a more and more personal conflict. Who is Simon really and who knows him better?

A race against time
No one disappears just like that. There must be some reason, I think. A plan, or a clue. Where does one start searching? Who can read the signs properly? A race against time begins. But above all a striving for the truth – in a foreign language and an unfamiliar city that sets conditions of its own.

“One could so easily go missing”

The script for your film is based on a true-life occurrence. How much of the story is purely fictional?

The starting point was a story a friend told me. The mother of a former roommate had called him to find out something about her son, with whom she’d lost contact. It was a striking moment: the two of them didn’t really have any connection to each other, but the mother didn’t know what else to do other than contact him. For my film, I replaced this woman with my own mother and developed a similar scenario – and why not, one could so easily go missing… The joint search in Marseilles they undertake in the film, however, didn’t happen in reality.

Why did you choose Marseilles as the backdrop for your film? Did you consider other cities?

Marseilles was the starting point of my research from the beginning. For me, the search for locations and characters was like a documentary reconstruction that is carried out in a way by the characters Valerie and Jens. Of course we thought about other locations, but the size of Marseilles, the language spoken there, its special situation as a port, providing the possibility of “fleeing” from Europe to Africa – all of this ultimately tipped the scales.

Are Valerie and Jens really seeking the same thing?

At first it looks as if Jens isn’t seeking anything. He keeps underscoring that everything is “normal” and invoking his friend’s autonomy. It takes quite awhile before he admits to himself that he, too, knows only individual facets of Simon. There is also a prior history between Valerie and Jens that becomes more and more evident over the course of the film. So the search for Simon also increasingly becomes a search for mutual respect.

How do you see the end of the film: will Valerie and Jens continue their relationship in Germany, or will they never see each other again?

My guess is that they’ll see each other at least one more time, because there are still some things they need to talk through. But I’m not so sure what will happen after that. They lead such different lives.

Jan Krüger was born in Aachen on March 23, 1973. He studied physics, social sciences, and education at the RWTH Aachen and later at the Academy of Media Arts (KHM), Cologne. From 2005 to 2006 he completed a master class at the Binger Filmlab in Amsterdam. In 1999, he shot his first film, the music video Die Verführung von Engeln; the short feature The Whiz Kids followed in 2001. Along with his work as a filmmaker, since 2006 he has also been a lecturer in film directing and screenwriting at the KHM Cologne.