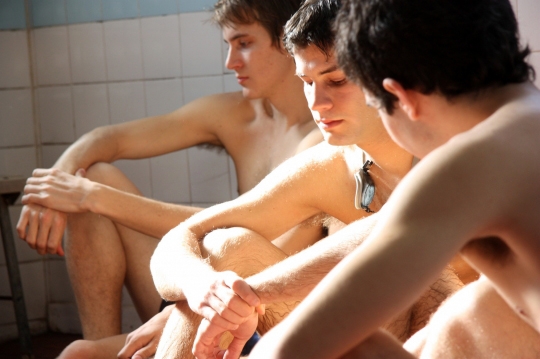 AUSENTE looks at the ambiguous relationship between a swimming teacher and one of his students. The film tells the story in a provocative elliptic style with cold, precisely composed pictures to transmit the often indefinable nature of desire.

Martin finds a whole series of excuses to subtly invade his sport teacher Sebastian’s privacy, ending up spending a night in his apartment. But when Martin’s intentions dawn on him, the teacher has already been compromised. It takes a tragic accident for Sebastian to become aware of his own feelings for Martin. AUSENTE is about the abuse of an adult by a minor, who is fully aware of his teacher’s delicate position and all too willing to exploit it. Marco Berger’s original feature film uses the glances exchanged by his protagonists to tell the story. Martin’s unwavering gaze is contradicted by his apologetic body language, which is nevertheless unable to conceal the fact that he wants to breach taboos and move into new territory. Sebastian’s evasive, worried look, on the other hand, reflects the fact that he does not want to see the game that is being played with him. Even the film’s first scenes at the swimming pool show Martin’s voyeurism, his pleasure in overstepping the line. He looks at himself in the mirror over and over again, affirming himself and consolidating his position. In this way, the film becomes a virtual thriller, aided by an artful soundtrack made up of deliberately emphasized noises and restrained music. Christoph Terhechte

Desire and admiration
The starting point for AUSENTE was to explore the sexual desires of an under-aged boy and the reaction of his teacher to those feelings. The film depicts the experiences of a boy who has strong feelings for a grown-up man, his gym instructor at school. Due to unexpected circumstances, the teacher offers to help the student sort out a problem by letting him spend the night in his house, but he soon discovers that the boy has made up the whole situation in order to stay at his instructor’s place. I chose to use elements of a thriller to explore the danger inherent in the relationship between the pupil and his teacher. In this case, it’s not the adult who takes advantage of an underaged kid; instead, it is the kid who plays with the adult, knowing that the adult is the one who has trespassed a limit by letting a young boy spend the night at his place. But the true goal of the film is to analyze the nature of desire and the way an adult should behave when faced with such confusing situations; the intention is not to punish him but to understand him without judging. Marco Berger