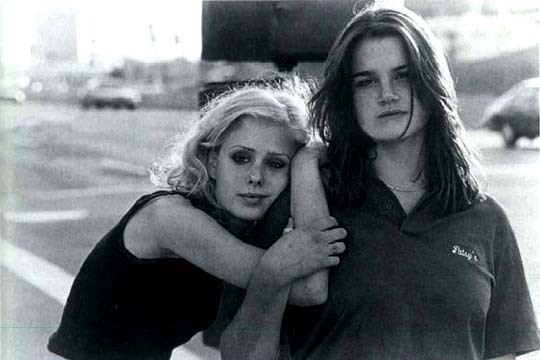 15-year old Claude lives with her mother in the New York district known as Hell's Kitchen. From her apartment it is only a short walk through the park to the house where here girlfriend, Ellen lives. It's summer-time and the school holidays are about to begin. Claude and her mother have nothing in common - on the contrary: Claude's mother is almost entirely preoccupied with her appearance and her new boyfriend and she shows next to no interest in her daughter on the verge to adulthood. And so it is that Claude and Ellen, who have known each other since they were very small, spend most of their time alone together playing guitar in Claude's tiny room - because their shared dream is to form a punk band. Ellen and Claude go through thick and thin together, they have absolutely no secrets from each other and are completely self-contained. All of this comes to an abrupt end when Ellen meets a boy from the neighbourhood called Mark. Mark is older than Ellen, a bit of a shady character who likes drugs and introduces Ellen to a whole new world. Mark is Ellen's first boyfriend; soon he is more important than anything else and Claude doesn't get a look in at all. A young man, Luke, moves into the apartment house where Claude lives and she somehow feels strangely drawn to him. Perhaps this is because Luke quickly realises that Claude's feelings for her girlfriend are deeper than she herself is aware. One day Luke becomes embroiled in a quarrel with Ellen's macho boyfriend in the pizzeria where Claude sometimes works. Later Claude comes across Ellen, who is so drunk that she can hardly stand up. In spite of this Claude takes her girlfriend back home with her. The next morning on their way to school the two girls notice that the park is full of police. A man has been stabbed - it is Luke. Both the murder and the suspicion that Mark could be the perpetrator creates an unresolvable conflict for the two girls. Moreover Claude slowly begins to realise that she is in love with Ellen, who, however, doesn't want to know. One evening Claude decides to overcome her inhibitions and takes off to a lesbian disco . . .

Born in New York on 31.7.1963. Studied film at Columbia University where she was taught by, among others, Emir Kusturica and Paul Schrader. Has worked on independent productions directed by Kathryn Bigelow and David Byrne as well as an editor (ANEMONE ME). Following her short, AMNESIA (1993), ALL OVER ME marks her first feature.