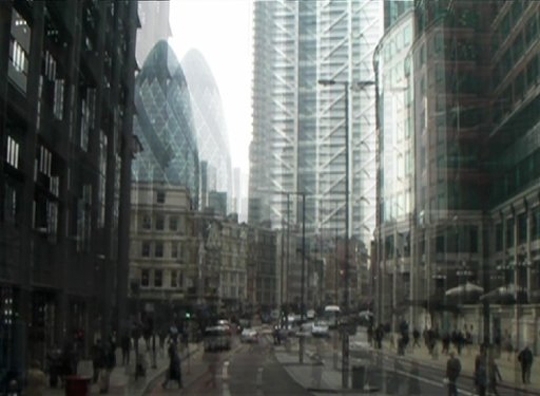 A world of our own

"The conversation starts: I identify with many persons, like Valeska Gert and Édith Piaf and Patti Smith and Ariana Foster and Rosa Luxembourg ...
... I think she was a freedom fighter. She was singing love songs and, eh, true life reports. ”(From the video transcript)

The video montage A WORLD OF OUR OWN weaves together stories of various Cosmo-figures, female explorers of worlds known and unknown, actual and fictional freedom fighters across different times and places, who assemble for a future mission in the world's largest financial center. They are linked through time and space through a montage of various elements, such as drawn animation, video footage shot by the artist, and found footage , combined with sound snippets from different sources, interview excerpts, radio transmission, music, written text, again animated.Both elusive and concrete A WORLD OF OUR OWN addresses current political struggles and feminist legacies, the past seeping into the present and enabling a different future, one in the here and now, a constant loop, just like the video montage itself forms a continuously playing sequence. The accompanying book AWORLDOFOUROWN contains a transcript that uses a narrative to expand on the references in the video, inciting the visual elements of the abstract animated parts. The book contains collages that draw on these references. It is printed on paper made from recycled GBP notes, and the incompatibility between different paper formats (A4 and US letter) give the book its shape.

Eline McGeorge’s work spans abstraction, concrete references, and documentary. Democratic problems, environmental issues, feminist legacy, and science fiction comprise McGeorge’s oeuvre. These themes are brought together through drawing, animation, collage, artist books, and weaving. In her solo exhibition “As Spaces Fold, Companions Meet” at Oslo Kunstforening, the artist explored folds as a visual and thematic motif. McGeorge’s drawn characters inhabit a science fictional world inspired by an interpretation of folded space, which allows fictional and actual characters to meet and be cast into new constellations across time and space. Alienation and hybridization are recurring traits of the characters populating these works.