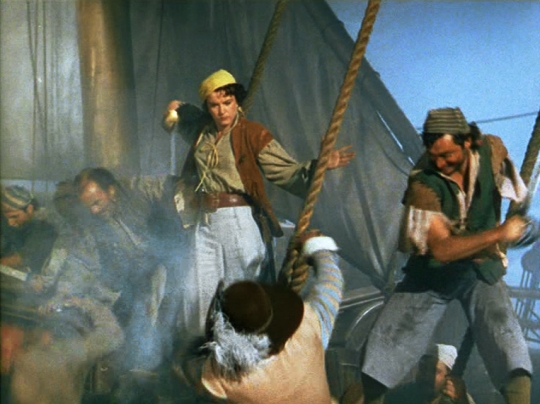 Anne of the Indies

Pirate captain Anne Providence finds a French prisoner on board a British ship she has captured.
Pierre François La Rochelle says he has been shanghaied by Anne’s archenemies and the lady
pirate eventually makes him her sailing master. Yet even as she unexpectedly lands in the arms
of the Frenchman, she is unsure she can trust him. The plot thickens even further when her father
figure, pirate captain Blackbeard, recognizes La Rochelle as a French naval officer and possible spy
… As the dust from the swashbuckling fighting lifts, this treasure chest of a film offers any manner of
circus-style attractions. While the Jolly Roger flying atop the mast makes for a black-and-white film
cameo of sorts, the spectacular colours below it have license to rampage like buccaneers. Colour is
even used to signify gender-bending in this proto-feminist flick – while Anne’s red bandanna worn
with otherwise plain clothing signals her willingness to engage in erotic gameplay, her rival is adorned
with the gift of a gold lamé dress, downgrading her to a mere sex object, a bit of “booty”.

Born in Paris, Tourneur went to Hollywood with his father, director Maurice Tourneur around 1913. He started out as a script clerk and editor for his father, then graduated to such jobs as directing shorts (often with the pseudonym Jack Turner), both in France and America. He was hired to run the second unit for David O. Selznick's "A Tale of Two Cities" (1935), where he first met Val Lewton. In 1942, when Lewton was named to head the new horror unit at RKO, he asked Tourneur to be his first director. The result was the highly artistic (and comercially successfull) "Cat Person" (1942). Tourneur went on to direct masterpieces in many different genres, all showing a great command of mood and atmosphere.