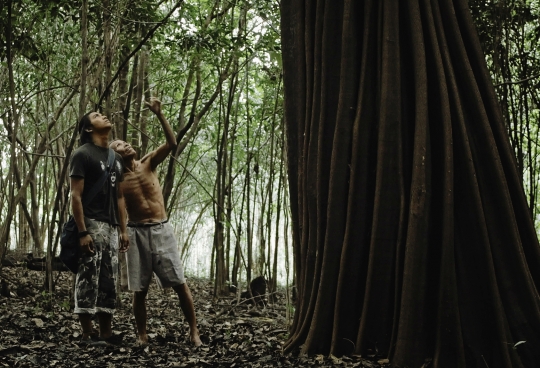 Having been born into an indigenous tribe in the Amazon, Anderson is familiar with painful initiation rites. He is now living with his sister and her sick little girl in the city of Manaus. He has a mobile phone and takes on casual work, but must face the challenges posed by the incompatibility between modern life and shamanism. For him, the two worlds collide on a daily basis: when his niece is to be sacrificed, when a mythical monster appears to him in human form, or when he experiences a one-night stand in a doom metal night club. The shaman has another ancient ritual in store for Anderson, without which, according to the healer, he will be lost forever. With powerful images accompanied by electronic music, directors Sérgio Andrade and Fábio Baldo create a portrait of a wanderer between two worlds. One – endangered and fuelled by myths and legends – is fading away in the dwindling space accorded to it by the white conquerors. The other is loud and exhausting, but perhaps one in which Anderson will be able to develop in a better way. Eschewing didacticism, the film paints a dreamlike documentary portrait of a disappearing culture.

Sérgio Andrade Born in Manaus in 1967, he has worked as local producer in the Amazon region. In 2008 he directed his first short film. His three shorts and debut feature JONATHAS’ FOREST screened at numerous international festivals including Rotterdam and Clermont- Ferrand. He is a 2013 Berlinale Talents alumnus.

Born in São Paulo in 1983, he graduated from the film school at the Fundação Armando Alvares Penteado (FAAP). He has directed a number of prize-winning short films. In 2015, the Cinémathèque Française in Paris held a retrospective of his films. He is also an editor and sound designer.