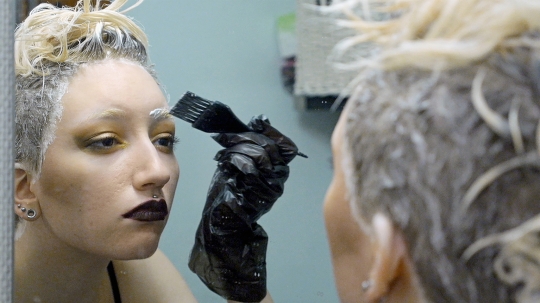 At the age of 17, Amber opted for the gender-neutral Swedish pronoun “hen” and began consulting a therapist specialising in gender identities. “If I lived with my friends on a deserted island where there are no norms, I might not be here,” says Amber. They are part of a new queer generation that confidently demands freedoms and opportunities not offered to them by society.

Lia Hietala and Hannah Reinikainen’s long-term observational documentary spans three years and portrays not only Amber’s transition, but also the friendship with Sebastian. Supporting each other during their transitions, the two are for a long time inseparable. Their friendship breaks apart when they first experience romantic love, yet each remains a presence for the other. The film gives us a glimpse of what it might be like to live on Amber’s utopian island. Possessed of a pop icon-like sense of style, Amber’s social-media-savvy circle of friends celebrates a spectrum of fluid identities and the value of the close ties that can only emerge from this freedom.

Born in Stockholm in 1992, she studied journalism at the city’s university as well as documentary filmmaking at Biskops Arnö Nordens Folkhögskola. As part of her work at the Story production company, she was assistant director and editor on Shapeshifters by Sophie Vuković. She has also directed two short films.