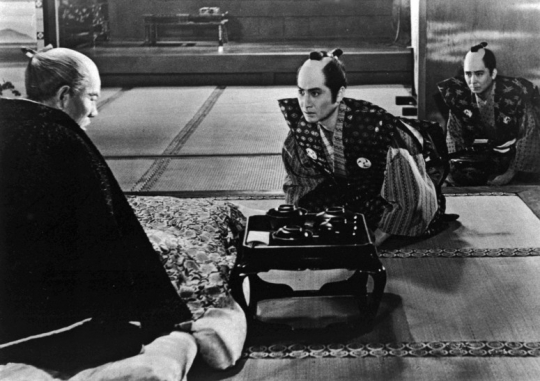 The attempted suicide of his fiancée prompts a Japanese salary-man to read his family chronicles and look back at the life of his ancestors. They were samurai, the military nobility caste who carried out acts of violence at the behest of feudal lords, but suffered evenmore so under their cruelty, often forced into ritual suicide (seppuku). The women were under constant threat of kidnapping and rape,and the men subjected to arbitrary disfigurement and homosexual slavery...

In a radical departure from the usual romanticisation of the samurai, director Tadashi Imai – using period sets and sometimes graphic images – made a film fundamentally critical of medieval Japan’s feudal system and the inhumane samurai code called bushido. In addition, the final two of the eight episodes in the film draw parallels between that and kamikaze pilots of World War II, as well as Japan’s modern achievement-oriented society. Cruel Tale of Bushido was awarded the Golden Bear at the 1963 Berlin International Film Festival. World premiere of the digitally restored version.