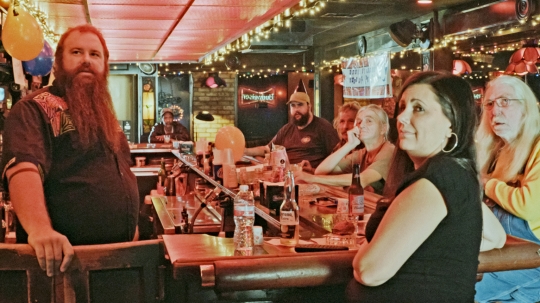 In their films, the brothers Bill and Turner Ross often train their camera on simple people leading far from glamorous lives. In this film they find their protagonists in the shadow of the glitzy world of Las Vegas, in a bar called Roaring 20s, which is on the brink of closure. Always observing, but nonetheless in the thick of it, they accompany the last 24 hours in and around the bar, enabling the viewer to immerse themselves in a microcosm that might well be found in many places in the world but that nobody likes to look at too closely. This is a place where people know and help each other, where they feel understood, can have it out with each other and reconcile again.

The film uses methods of the documentary to achieve an unobtrusive proximity that makes us feel as if we too are taking a seat among the regulars at the bar, partaking in Michael’s philosophical excesses, listening to Shay’s tearful expressions of love, and experiencing for ourselves the caring familiarity of this place. In the end, when the last customers stagger out of the bar, we’ve grown fond of them all and have to wonder what their next day will be like and what life holds in store for them.

Born in Sidney, Ohio in 1980, he works with his brother Turner. For their documentary 45365, a portrait of their home town, the two directors received numerous awards including Best Documentary Feature at the 2009 South by Southwest Film Festival in Austin, Texas. They followed it three years later with Tchoupitoulas about their second home of New Orleans.