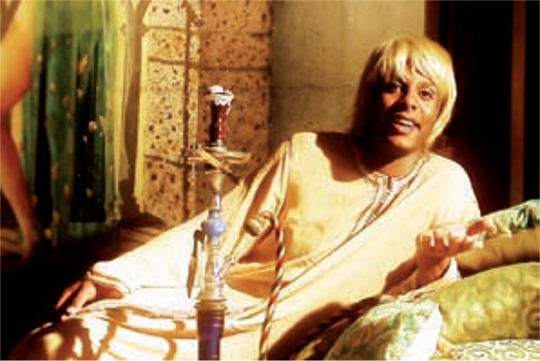 Zina is a young Italian woman of Moroccan descent. She is to marry a wealthy Arab in Turin. Shakira, a Moroccan transvestite and the best dressmaker in town, is making her wedding gown. While Shakira is taking her measurements, Zina suddenly bursts into tears. She admits to being terrified of the marriage – because she is no longer a virgin. Shakira decides to help her.
Together they set off for Morocco, because, they say, this is where they will find the most beautiful wedding gowns, wonderful creations made from the finest materials from the markets of Fes and Marrakesch. In truth however the pair set off for Casablana so that Zina can undergo an operation that will restore her virginity. They have just one week before they have to be back in Turin – for that is when the traditional tattoo that Zita received before she left will fade.
During the course of their trip Zina and Shakira traverse Spain and travel deep into the Moroccan interior. The journey changes all of their plans. With every day that passes, the relationship between the two becomes increasingly ambiguous in its complicity, and Shakira feels less and less inclined to make Zina the wedding dress that will deliver her up to another man. At the end of their journey that has taken them through a country undergoing a process of rapid change, Zina and Shakira eventually find themselves in Casablanca, where the famous film of the same name ended!

Born in Fossano on 29.12.1973, he took up studies in documentary filmmaking in Italy in 1993/94. He lived in South America for six years where he made documentaries and video promos for Aids prevention. In 2002 he graduated from London Interna - tional Film School. An editor, he made his feature film debut in 2005.

Born in Pescia on 23.11.1977, he studied at the London International Film School and has made short films and documentaries in England, Italy and Spain. CORAZONES DE MUJER, which he co-directed with David Sordella using the pseudonym “Kiff Kosoof”, is his first feature film.