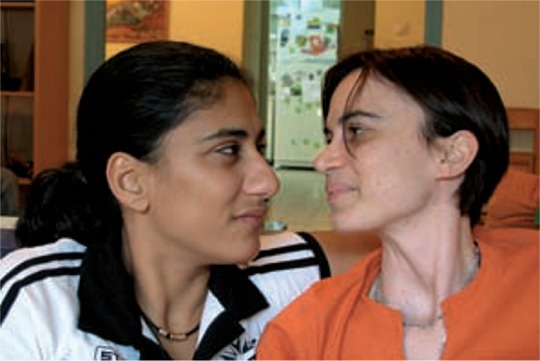 CITY OF BORDERS – that´s Jerusalem. In the heart of Jerusalem – defying generations of segregation, violence, and prejudice – stands an unlikely symbol of tolerance, a gay bar called “Shushan“. Inside this underground sanctuary, people of all nationalities, religious affiliations, and sexual orientations gather under one roof to find acceptance and community among those typically viewed as each other´s “enemy“.

This film follows the daily risks and struggles of six Israeli and Palestinian bar regulars (Sa´ar, Boody, Adam, Amit, Ravit, Samira) as they strive for tolerance, dignity, and their right to belong. On the one hand, the film is set in the context of the construction of the “Separation Wall“ between Israel and the Palestinian Territories. And on the other hand, during the fight to hold Pride parade in the Holy City, which in 2006 was moved to a stadium due to security reasons. Each of the protagonists face limitations, disappointments, and contradictions within themselves while attempting to transcend the toughest barriers that divide people.

Sa´ar (Shushan owner and city council member): “Jerusalem really is the city of borders. There is a border between East and West, between Jews and Palestinians, between secular and ultra-Orthodox, and between straight and gay“.

Born in Seoul on 14.10.1972, she moved to Connecticut at the age of eight. After studying biology and psychology in Berkeley, she had various jobs in radio and at television stations. Following her award-winning reports – one on the massacres that took place in Palestinian refugee camps Sabra and Shatilla, and another on Korean women forced into prostitution during the Second World War – she decided to make Jerusalem’s only gay bar the subject of her directorial debut as a filmmaker.