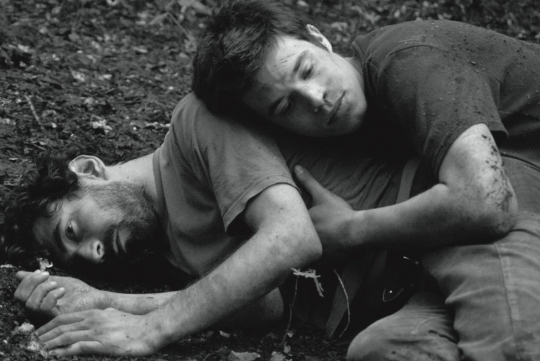 "COMBAT" is the third and last part of the filmed diary started by Patrick Carpentier in 2003 and entitled "The Irregularity of the Tearing". Two young men fight with each other. They hit each other very hard. But their fighting remains an act of love. There is no prize. There is no winner. There is no pride. A voice-over narrator tells a strange story in which he rediscovers the extent of his desire. Questions arise: does one inflict pain on the other or on oneself? How can we let go in a world in which we are taught not to let ourselves be pushed around? COMBAT is a dissection of pain, of abandonment.

About The irregularity of the tearing
From documentary to fiction, The irregularity of the tearing is an intimate journey along the author’s transient love stories: two and a half years of sensuality to question intimacy, an exploration of desire and reason. GOD IS A DOG, the first part, confronts the author with himself in a mirror of Super8 images interspersed with childhood memories, romantic encounters and separations. THE 9 TUESDAYS, the second part, tells of the absurdity of time passing, time that re-opens and cures childhood wounds, time that brings a rhythm to the impossibility of loving, time that provides the courage to continue and to go through mourning. More fictional, the third part, COMBAT, asks the viewer: how can one let go in a world where one learns not to? Is it possible to reach the end of desire? From GOD IS A DOG to COMBAT. From past to present, from Super8 to digital format, from documentary to fiction.

Director’s statement
Diary writing is more of an act than a text. It is a duty of remembrance that fights remembrance because of the latter’s propensity to crush and embellish memories. A transformation. Personal diaries allow one to write down the memory of a transformation. Started in the spring of 2003, LA PEUR TUE L'AMOUR is a cine-diary in three parts that deals with my preoccupations: intimacy and the relationship to one’s body, sensuality, desire as opposed to reason, loves, mourning and resistance. Using “I“ to speak about “us“: At the end of the shooting of LA PEUR TUE L'AMOUR, a documentary for which I had interviewed twentyfive people, I realized that at a given time during each of these meetings, I told myself: “He/she is talking about about me!“ I found that idea reassuring; it was pointing me to a kind of universality. Maybe we’re all the same? Maybe we all have the same questions, the same need for love? I don’t really have an answer for that. But I am convinced that if I speak about who I am, about how I live, about my encounters, my pains, my joys – without morale, without judgement – I will not only speak about myself and my intimacy, I will also speak about us all. Filmed diary as a passage from documentary to fiction: My first film, a 16mm video-clip shot for the rock band Venus, is the only completely fictional film I ever directed. Since then, all my films have been leaning towards documentary, either experimental or more formal, such as La peur tue l’amour. For The irregularity of the tearing, I surprised myself by letting the manufacturing of my films evolve: an exclusive focus on editing with GOD IS A DOG, built around Super8 images shot well before the production of the film, and
day-to-day shooting directly based on my life’s moments for THE 9 TUESDAYS. I wanted to fictionalize COMBAT, the third and last part of my diary. This allowed me to go further, to use actors to embody archetypal characters. A small part of the collective unconscious, finding its place into my imaginary
world. Desire, pain and abandonment: COMBAT is mostly the story of an unexpected encounter that stirred my desire, a merger of violence and tenderness. A sensual encounter pushing desire into its last entrenchments. Following a voice-over. Following a tone. A blow. A blow that remembers. A blow that is afraid. It is also the story of two boys who retreat into the woods for a close combat, without witness. They are alone. Far away from the city and its preoccupations. They are not in search of an absolute, they simply live what they have to. They don’t think, they live. A contrast. A quiet voice in the surrounding torment. “When I’m alone, I think. And when I think, I’m afraid.” This is a film about the fear of abandonment, about letting go. A dissection of pain.

Patrick Carpentier was born in Brussels on March 22, 1966. A graduate of the Kleine Académie theater school in Brussels, Patrick Carpentier worked on a dozen theatre productions during the 1990s as an actor, director and/or set designer. A member of the rock band Venus from 1997 to 2001, he was responsible for its set design, videos and cd covers 1. In this capacity he directed a video clip and a promotional fi lm for the band. He also produced all the Venus CD sleeves. Since 2002, he has been focusing on fi lmmaking, alternating between personal and commissioned work. He is also the author of several installations in the framework of collective exhibitions.