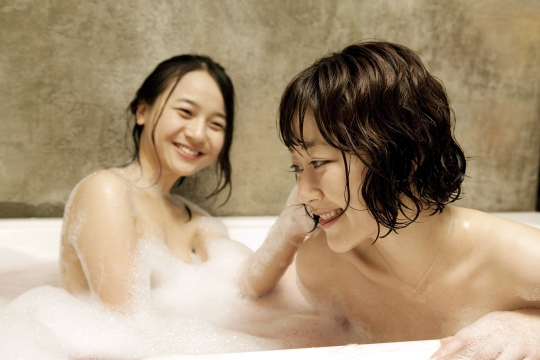 Three women talk about love. Jung is preparing an art exhibition. After teaching an art class her attention is drawn to some nude drawings by one of her female students, the somewhat recalcitrant Hee-jin. Yoon, the young woman depicted in the drawing, is not only extremely beautiful, there is also something mysterious about her, and one senses, in her presence, that she harbours a story. Jung asks Yoon to pose in the nude for her exhibition project; she agrees and shortly afterwards Jung, Yoon and Hee-jin set off to do some video filming at the beach. And so, by fate or coincidence, three women who couldn’t be more different from each other find themselves brought together on this particular evening. They sit by sea; they drink and they listen to Yoon, who tells them of her lost love. Two women encounter love. Fed up with her dreary, utterly boring life, Yoon decides one night to pretend to commit suicide. As luck would have it, she meets Kang, a young woman who drifts through life earning a living as a pickpocket. Yoon and Kang’s love story begins when the two women are handcuffed to each other. The women manage to escape and, once they have shaken off the police, they kiss for the first time. Shortly afterwards the women move in together and begin to enjoy a carefree life. But their blissful existence is not to last. Kang’s depressing lack of prospects and Yoon’s growing expectations prove too much of a burden for their relationship. Listening to Yoon, Jung and Hee-jin learn a completely different side of love.

Born in Seoul in 1968, he studied film at Dongguk University in Seoul. In 1997 he was assistant director on Jang Sun-woo’s NA-PUN-YOUNG-HWA (TIMELESS BOTTOMLESS BAD MOVIE) which screened in the Forum section of the Berlinale in 1998. He made his directorial debut in 2004 with KUIYEO-UO.