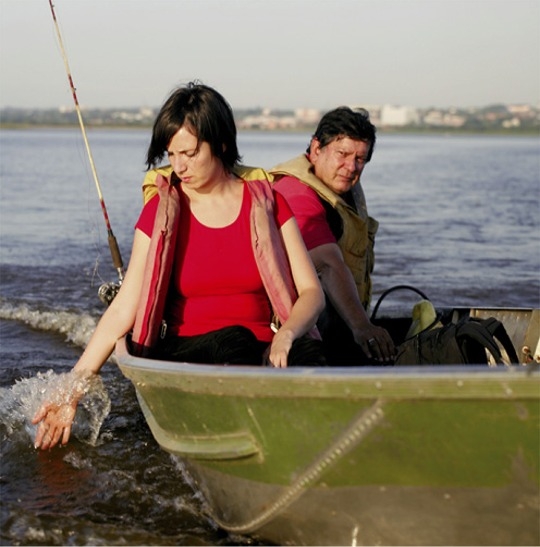 »Rodolfo was the only one of my many uncles who wasn’t a blacksmith like my grandfather. Rodolfo wanted to be a dancer.« This film takes up the hunt for clues about the life of Rodolfo, the Paraguayandirector’s uncle. Along the way, she finds out that Rodolfo’s name is on a list of 108 homosexuals that were imprisoned and tortured by General Stroessner’s dictatorial government in the 1980’s. »Rodolfo’s story unveils a piece of the deathly silent history of my country.« During the dictatorship and in the 15 year transitional period, 336 people disappeared, 20.000 were arbitrarily arrested, 18.000 tortured and at least 59 executed. Rodolfos dead body was found when the director was a child. When she asked her parents why he died they said, »From Sadness.«

﻿It was winter. My father called us urgently. My uncle’s naked body had been found on the floor. There was a crowd of people standing about. The police dispersed the curious onlookers. My relatives were there. They asked me to go inside and choose the clothes in which he would be buried. I opened his wardrobe: it was empty. When I asked them what he died of they told me: of sadness. That answer contradicted all my memories of his life. I think my parents made a mistake when they told me as a child: “You must not enter your uncle’s house.” From that moment on, everything he did attracted my attention. Rodolfo was different. He wore flashy clothes, listened to Elvis and danced at every birthday party. The strange thing was that the chair by his side was always empty. He was the only one of my father’s brothers who didn’t want to be a blacksmith like my grandfather. In Paraguay in the eighties, under Stroessner’s dictatorship, he wanted to be a dancer. In my film I search for traces of his life, and discover that he was included in one of the ‘108 lists’, and was arrested and tortured. Even today in Paraguay when someone calls you ‘108’ they mean ‘hooker, faggot.’ For more than one generation, the time the dictatorship lasted, men who came under suspicion of being homosexual or against the regime were the favourite target of collaborators. When he was released, my uncle hid in his corner until his wounds healed. Rodolfo's story reveals a part of the hidden and silenced history of my country.
Renate Costa

Born in Paraguay in 1981. Graduated in Audiovisual Direction and Production in Paraguayan Professional Institute. She studies Documentary Filming in the International School of Cuba. Since 2006 until 2011 she lived in Barcelona where she obtained her Master in Creative Documentary at the University Pompeu Fabra. As a director, she made "Cuchillo de Palo", produced by Estudi Playtime, world premiere at Berlinale 2010, projected at Cannes L'Acid and several festivals, winning more than fifteen prices (Dei Popoli, RIDM, Málaga, Lima, Bafici, DocsLisboa, Miradas Doc, La Habana, etc).

As an Executive Producer, she worked in the film "Cándido López los campos de batalla"(102' 35mm) by José Luis García, winner of the Public Price at the BAFICI (2005) and several argentinian Condor's. She collaborated in the development of the paraguayan films "Paraguayan Hammock" by Paz Encina, "La Santa" by Juan Carlos Maneglia y Tana Schémbori (non filmed) and "18 cigarrillos y medio" by Marcelo Tolces, Bafici 2006. She produced and directed 13 chapters of the documentary series for TV "Histories of the way" with Jorge Rubiani and co-produced by Chanel 4, Telefuturo.

In 2012 she co-directed, co-produced and co-edit "Resistente" with Salla Sorri, World Premiere at the 69º Mostra International de Venezia - Horizonti Shortfilms Competition. "Resistente" was produced by CPH:LAB.

In 2013 she co-directed REVUELTA(S) with Fredi Casco, premiere at the Fondation Cartier at Paris in the exposition "América Latina photographers" exposition and just after she co-write and edit the 30th Aniversary film for Cartier Fondation called "Memoires Vives" by Fredi Casco.

In 2013 she created "Muâ" and "LOS RESIDENTES", cinematographic workshop for scriptwriters and directors, with Lucrecia Martel, Violeta Bava and Paz Encina as tutors.
- IMDb Mini Biography By: Grupo Perdomo S.A.