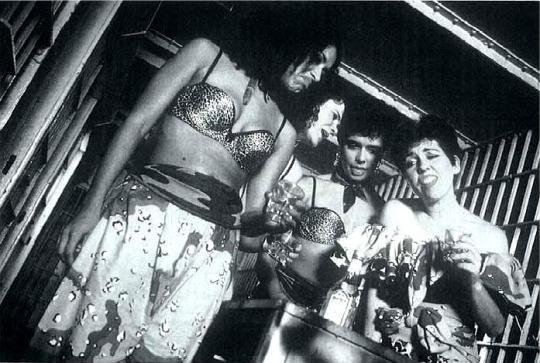 Carmelita Tropicana: Your Kunst Is Your Waffen

"Hello people - I don't need no American Express Card! I am Carmelita Tropicana, Ms. Lower East Side Beauty Queen, famous nightclub entertainer an star of stage and screen. I love the Lower East Side. The men especially very friendly. All the time when I walk down the street they say: 'Oye, mami, mami ...'."

Performance artist, Carmelita Tropicana, lives in Manhattan's East Village, by Hamilton Fish Park. After a performance one night, she's mugged by a knife-wielding thief. The next day, in a clash with anti-abortion protesters in front of a woman's health clinic, Carmelita is arrested, along with her lively friend Orchida and her sort-of up-tight and wannabe-wealthy sister, Sophia. They're placed in a cell with another woman, who turns out to be last night's mugger, a down-and-out young woman named Cordelia (Dee). Relationships between each pair of women and among the four of them go through changes as the afternoon passes.

Ela Troyano is a Cuban-born filmmaker. Her short, Carmelita Tropicana, won the Teddy at the Berlin International Film Festival.
Troyano has also worked as a theater director in a long-standing collaboration with her sister, the performance artist Carmelita Tropicana.

1997 Latin Boys Go To Hell  1993 Carmelita Tropicana: Your Kunst Is Your Waffen