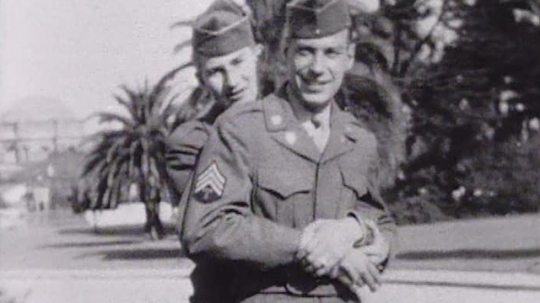 Coming Out Under Fire

COMING OUT UNDER FIRE features nine gay and lesbian veterans who recount how they joined the patriotic war against fascism in the 1940s only to find themselves fighting two battles: one for their country and another for their right to serve. They first remember warm and entertaining stories of finding each other in a compulsory heterosexual environment and reminisce over tales of first love and deep friendships. Their good times were short-lived, however, as they became targets of newly created anti-homosexual policies which called for witch hunts, dehumanizing interrogations, involuntary psychiatric treatments, and the incarceration of suspected homosexuals into "queer stockades". The final humiliation was a dishonorable discharge which stripped a soldier of all veterans benefits as well as being officially branded a "sex pervert" for life.

COMING OUT UNDER FIRE is based on the ground-breaking book by MacArthur "Genius Grant" recipient, Allan Bérubé, and integrates compelling on-camera interviews with declassified military documents and archival footage on sex education, mental health, prison compounds, and court martial hearings. It probes the origins of the military's anti-homosexual policy to document how pseudo-psychiatry, erroneous medical theory, and misplaced ethics masked a policy based on nothing short of prejudice. COMING OUT UNDER FIRE concludes with riveting scenes from 1993 U.S. Senate hearings which expose how the American government continues to justify and reaffirm it's 50-year-old system for persecuting homosexual service personnel. The final outcome: today's Congressionally mandated "don't ask, don't tell" compromise only serves to perpetuate the real problem -- bigotry and the continued violation of gay and lesbian civil rights. (production note)

Arthur Dong is an Oscar®-nominated and triple Sundance award-winning filmmaker, author and curator whose work centers on Asian American and LGBTQ stories. A common theme that underscores his films is personal stories of survival and resistance set against backdrops of social and cultural oppressions. A San Francisco native, Dong's film career began with "Public," an animated Super-8 film shot on his bedroom floor. Based on a poem he wrote, "Public" tells the story of a child's response to societal norms and the culture of violence in America. The five-minute film earned first prize at the California High School Film Festival and was the young filmmaker's introduction to the power of film as a tool for progressive change. Dong's films that investigate anti-gay prejudice include "Family Fundamentals," "Licensed to Kill," and "Coming Out Under Fire." His films about Chinese Americans include "Sewing Woman," "Forbidden City, USA," and "Hollywood Chinese." His latest film, "The Killing Fields of Dr. Haing S. Ngor," profiles a Cambodian genocide survivor who went on to become the only Asian male who has ever won an Oscar® for acting. Among Arthur's over 100 film excellence awards are an Oscar® nomination, three Sundance Film Festival awards, the George Foster Peabody Award, five Emmy nominations, the Berlin Film Festival's Teddy Award, Taiwan's Golden Horse Award, and two GLAAD Media Awards. He has also been twice-selected a Rockefeller Fellow in Media as well as a Guggenheim Fellow in Film. His honors for public service include the Organization of Chinese America's Pioneer Award, The Art Deco Society's Historic Preservation Award, the OUT Magazine 100 Award, Equality Forum's LGBT History Month Icon award, and San Francisco State University's 2007 Alumnus of the Year award "for his continued success in the challenging arena of independent documentary filmmaking and his longstanding commitment to social justice." Funding for Dong's work has been received from the National Endowment for the Humanities, the National Endowment for the Arts, the Ford Foundation, the Soros Documentary Fund, the Sundance Institute's Documentary Film Program Fund, the John D. and Catherine T. MacArthur Foundation Initiative, the Independent Television Service (ITVS), the Center for Asian American Media, the Corporation for Public Broadcasting, Cal Humanities, the American Film Institute, among many others. Besides film production, Arthur has served as a curator for the exhibitions, "Chop Suey on Wax: the Flower Drum Song Album" at the Chinese Historical Society of America Museum in San Francisco, "Forbidden City, USA: Chinatown Nightclubs" at the San Francisco Public Library, and most recently, "Hollywood Chinese " at the iconic Formosa Cafe in West Hollywood. Arthur has served on the boards of the Academy of Motion Picture Arts and Sciences, the National Film Preservation Board at the Library of Congress, Film Independent and Outfest. He is the subject of full chapters in the books "Travels in a Gay Nation: Portraits of LGBTQ Americans," "The Views from Here: Conversations with Gay and Lesbian Filmmakers," "Hostile Climate: Report on Anti-Gay Activity," and "Independent Film Distribution." He recently served as Distinguished Professor in Film at Loyola Marymount University in Los Angeles where he taught graduate courses and designed MFA and certificate documentary programs. Dong's first book, "Forbidden City, USA: Chinatown Nightclubs, 1936-1970" won the American Book Award, and his follow-up book, "Hollywood Chinese: The Chinese in American Feature Films," was published in 2019.