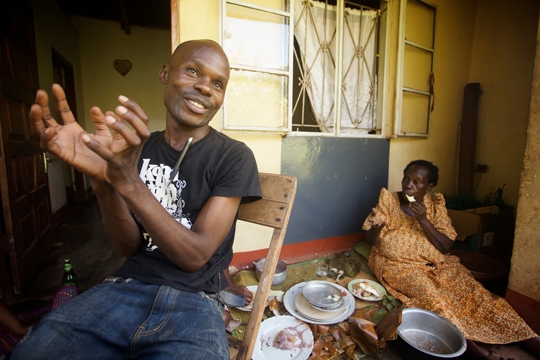 The anti-homosexuality bill that religious groups in Uganda are trying to have passed, calls for imprisonment of homosexuals and, in ‘severe cases’ even the death penalty. In a country where ninety-five percent of the population condone the criminalisation of homosexuality, a group of queer activists are fighting to prevent this legislative proposal from going ahead.
This film describes the life of David Katos, Uganda’s first openly gay activist, and his comrades-in-arms. His is a life constantly pervaded by fear of attack, but also characterised by moments of happiness and celebration. The film contains the hate-filled and sarcastic tirades of Christian fanatics, but also introduces us to Bishop Christopher Senyonjo, the only cleric to demonstratively position himself on the side of the persecuted gay community and offer them his protection from attacks.
Events take a tragic turn when David Kato is found dead in his bed having been bludgeoned to death. When at Kato’s funeral the parson begins to preach a hateful anti-gay sermon and causes uproar, Senyonjo once again steps in to give Kato his last rites and console the activist’s mourners.
In its quietly observational way, this film portrays an exceptionally homophobic and Christian-fanatical environment, the extremity of which helps to strengthen Uganda’s LGTB community.