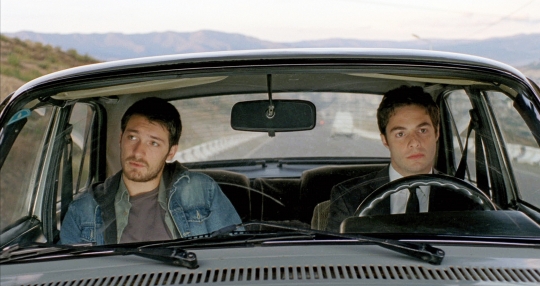 Dimitrij loves going off on solo climbing expeditions. He'll do anything to escape the gruellingly surreal conformity of the small Georgian town he lives in and the monotony of the courthouse where he works. His father, the judge, presides over the courthouse with the same despotic manner he rules the dinner table at home. A man hands out faded flags in the neighbourhood; an aunt suffering from Alzheimer'sis convinced her brother-in-law has robbed her; and people come together on dreary afternoons to kill time eating cake, pouring forth monologues and listening to operaticarias. One day, a stranger named Andrej turns up and Dimitrij convinces him to accompany him on his climbing expeditions. He pulls Andrei ever closer into his world,determined to be friend him. But then Andrej disappears. Dimitrij believes all is lost before his imagination persuades him to pursue a series of mysterious leads.Zaza Rusadze’s film is an oppressively atmospheric portrait of a small town community caught up in the tread mill of habit. With magical images illustrating the central character's vivid imagination, this assured work casually reveals the protagonist’s emotional world.

Born in Tblisi in Georgia in 1977, he worked for Georgian state TV for several years. In 1996, he began studying directing at the university of Film and Television in Potsdam. Alongside his studies, he has worked as a TV editor and translator at the Berlinale. After graduating, he gained experience working as an assistant director for, among others, Otar Iosseliani.